This story has popped up every year or two since I can remember:

An epic 8,400 mile railway route will link London to Tokyo in an ambitious project proposed by the Russian government.

Vladimir Putin’s officials are currently in serious talks with Japan about constructing a 28-mile bridge to enable trains to cross the sea.

Serious talks? I’d love to get hold of the Russian version this is based on.

The blueprint for the project, once mooted by Stalin

Projects which have been mooted for seventy years rarely come to fruition. The glaring exception was the Channel Tunnel, on which early efforts were made in the 19th century. 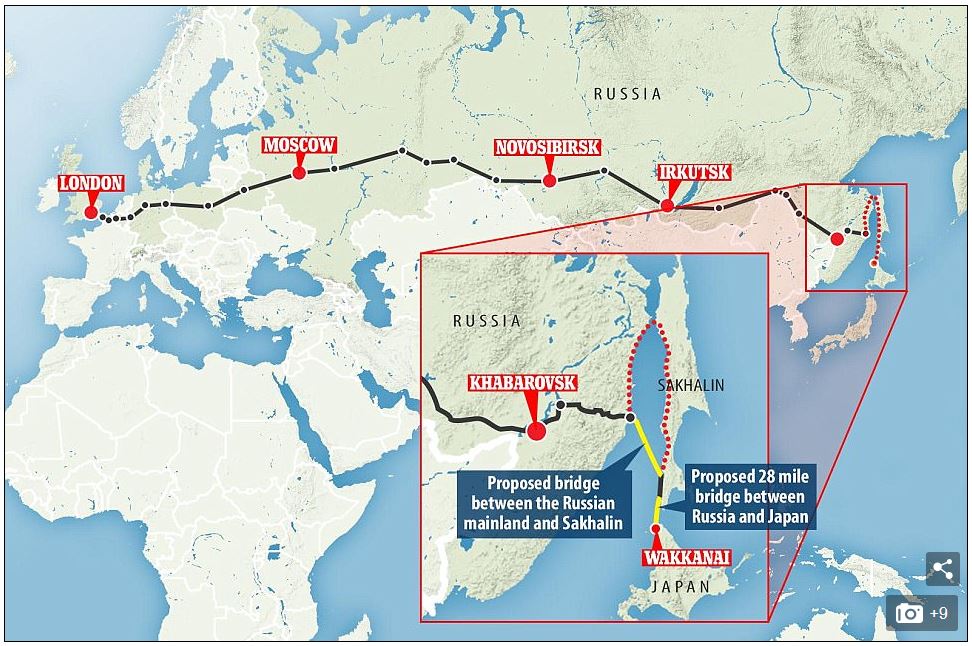 You can guess why I’m interested in this, can’t you?

Russian’s vice premier Igor Shuvalov said: ‘We are seriously offering our Japanese partners to consider the construction of a mixed road and railway passage from Hokkaido to southern part of Sakhalin.’

Sakhalin is Russia’s largest island – and it would take a 28-mile bridge or tunnel to link to Hokkaido in northern Japan, which is connected to the country’s super-efficient rail network.

Shivalov said: ‘We are close to starting our part of the job.’

Hmmm. Technically it’s probably feasible, although that straight line from Sakhalin to the mainland looks as though it was done by an intern at the Daily Mail. Why you’d build a bridge at an angle like that I don’t know, starting from some random spot along the coast of south-west Sakhalin. There is absolutely nothing whatsoever in that area other than a few decrepit and largely abandoned towns that were once fishing collectives. I know this because I’ve been there and took some photos, so you can see for yourselves. It would be far more sensible to take the line up to the midpoint where the mainland is closer and put the bridge there; I suspect the word “proposed” in that part of the drawing is somewhat misleading.

But even if this is technically possible, as an economic prospect it’s laughable. If the Japanese want to get to Europe they can fly and, with their being short, leg-room isn’t a concern even on long-haul flights. Why on earth would they choose to go by train which would take anywhere between one and two weeks? Okay, there is a certain romanticism still attached to the Trans-Siberian railway and die-hard travellers still take it and enjoy it. I never did it, but I have spent 3 days and 2 nights on a train between Moscow and some snowfield near Nizhnekamsk in Tatarstan and let me tell you, the novelty is gone an hour or so into the second day. The biggest problem by far is that Russia, when viewed from the train, is mind-numbingly boring for 90% of any given journey. I’ve done a fair few trips on Russian and Ukrainian trains and mostly I remember vast snowfields the size of France and as flat as a billiard-table stretching out of sight in all directions. And for some confounded reason they line the damned tracks with birch trees so you couldn’t see anything anyway. On Sakhalin we had mountains to look at (through gaps in the brown sludge that adheres to the windows) and it was nice enough for a few minutes, but hardly something you’d pay very much to do. As the Daily Mail says with a certain tongue in cheek:

Passengers would be able to marvel at the snow-capped mountains in Siberia before discovering the stark and deserted countryside of Russia for bulk of the trip.

Uh-huh. Of all the people I knew in Russia, just one did the Trans-Siberian from Khabarovsk to Moscow: a Dutch girl who was mad as a hatter and would later go on to build schools in Zimbabwe using her hands. She loved this sort of stuff, but I doubt many others would.

As a freight route it would be equally useless. The population of Sakhalin is around 200-250k people; the biggest population centre is Yuzhno-Sakhalinsk with 174,203 people according to Wikipedia. This hardly represents an enormous, untapped consumer market just waiting to be opened up. Some Russians might appreciated being able to nip to Japan for the weekend by train, but it’s hard to see why any Japanese would go the other way except for a few who like to shoot bears and the fewer still who like to get yelled at by staff in restaurants. What about the connection to the mainland? Well, back in the construction boom I was sending men and materials from Sakhalin to De Kastri and they’d take the overnight ferry from Kholmsk to some absolute shithole of a port on the mainland whose name I forget. The ferry was some stinking thing from the Soviet era and most people opted to sleep in their vehicles. Anyone not lugging scaffolding around took the plane. In short, nobody is very much interested in going between Sakhalin and the eastern mainland unless by plane, and even then it’s not many. With sea freight costs being what they are, the idea of taking goods halfway around the world by train, or sending them from one wasteland to another, doesn’t make much economic sense.

A bridge between the Russian mainland and Sakhalin has been costed at around £4 billion, while a link to Japan is likely to be more expensive.

The scheme was unveiled at Russia’s Eastern Economic Forum hosted in Vladivostok by Putin.

I bet Putin wasn’t around when this scheme was unveiled. This is a PR stunt for some company or technical college, nothing more. Well done to the Daily Mail for covering it, though.

34 thoughts on “Bridges to Sakhalin Island”