At the back end of last week, fellow blogger JuliaM and I had some fun responding to this set of Tweets (you can read the whole thing here if you wish). I might be being a bit unfair picking on this chap in particular, but I do so because he’s indicative of a much wider problem. It starts with him complaining about the mess which is Universal Credit. That part I can well believe – it is a government-run scheme after all – but it’s the underlying story that is more interesting. 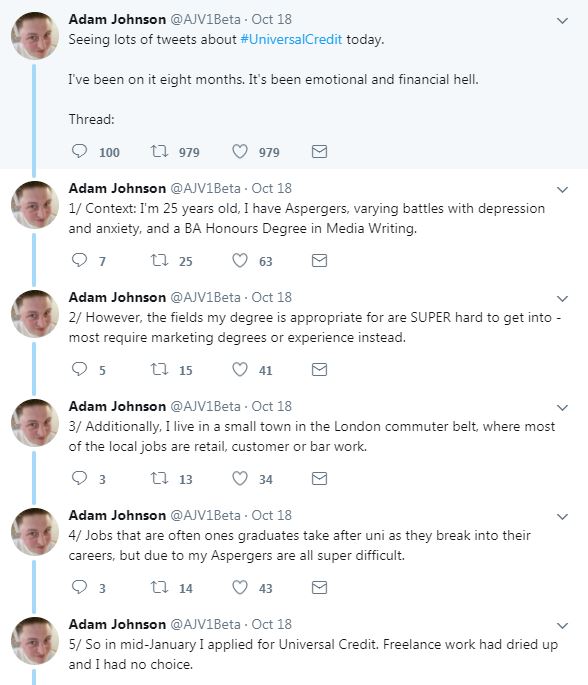 Where to begin? Firstly, I don’t know much about Aspergers and depression, so I can’t say whether these are real and serious impediments to getting a job or he’s just being a fanny. What I have noticed is that these afflictions seem to be rather prevalent among middle-class lefty political commentators; if people working on construction projects around the world suffer similarly, they generally don’t mention it. And I’ll note these disabilities didn’t seem to stop him getting a degree. As for anxiety? Well, that’s an unfortunate side effect of being alive.

Secondly, he’s only now finding out that a BA Honours Degree in Media Writing is worthless. He says his degree is appropriate for certain fields and in the same sentence says these fields actually require different degrees. He’s also only just finding out that media and journalism are difficult fields to break into. It sounds to me as though he didn’t bother doing proper research into what fields he wanted to work in, what the entry requirements are, and what the demand for such work is.

Note that he is calling himself a freelance writer. He complains most potential employers want experience. This chap is 25 and appears to have no relevant experience he can show an employer, which raises the question: what they hell has he been doing between 18-25? If he wanted to be a freelance writer, he should have got out there and done some freelance writing. Does he have a blog? Has he done any freebies to get his name about? Or is he just expecting to turn up in a job aged 25 with no experience on the basis of a worthless degree.

Also, if you suffer from depression and anxiety, is freelance writing a wise career choice? Freelance anything looks pretty stressful, particularly writing. “Freelance work dried up”? Was there any to begin with?

Then we have the idea that retail, customer service, and bar work are jobs university graduates take as they “break into their careers”. Well, back in my day these were jobs you did while you were at university. Nobody “breaks into their careers” doing bar work, unless you want to be a barman. It seems as though this chap, at age 25, has never held a job of any sort in his life. Now this might be due to his Aspergers, but the fact he seems unaware that students are (or were) expected to work in the holidays suggests that’s not the only factor in play here. The benefit of crappy student jobs is not just the beer money, it also gives you the beginnings of a CV. My first job was as a teenager scrabbling around on a farm. The farmer wrote me a reference when I got a formal summer job on a different farm. That farm’s manager gave me a reference when I applied for a job at Toys R Us a few months later. Flogging toys has little to do with picking cabbages and driving tractors, but when you’re 19 a letter from an adult confirming you can turn up on time and not steal anything is invaluable. My first proper job after university (aged 23) was something like the 6th or 7th job I’d held. If you’re 25 and trying to get your first job of any kind – well yeah, you’re going to struggle.

Here’s an anecdote for you. When I was working in Dubai I was in a crap job going nowhere on pretty rubbish pay. I desperately wanted to work in Russia and started applying for jobs elsewhere. I reckon over the course of a year I applied to something like 100-120 jobs, most of which I was suitable for. I got replies to about 3 or 4 of them; all but one said “no thanks”. The rest simply ignored me. But the one who replied interviewed me and gave me the job in Sakhalin which launched what passes for my career. As someone once said to me, you have to be in love with the word “no”. And as someone else said to me, you only need one job. Eventually something will come up, but if you start feeling sorry for yourself and “unable to go anywhere or do anything” you’re giving employers a clear warning of what sort of person you are.

Of course, it doesn’t surprise me he’s still living with his parents. Had “rent been an issue” he’d have got himself a job come hell or high water, instead of moping about the place complaining nobody will give him a freelance writer’s job. Yes, rent is expensive which is why most people – even engineering graduates working decent jobs – house-share for a while. No doubt this guy’s Aspergers prevents that, too. 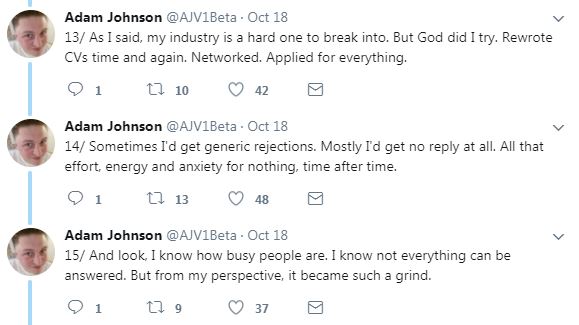 Welcome to the world of work, son.

Awful hours? Sorry, what else were you doing with your time? You’re complaining about not having a job, yet turning your nose up at warehouse work? Why, because it’s beneath a nice, middle-class boy with a BA in Media Writing? See, if you’d taken that warehouse job while you were at university you’d be a floor manager with a forklift licence by now, and if you worked nights you’d be on double-pay able to do all your writing bollocks in the quiet periods. And yes, entry-level pay is awful – although it’s still minimum wage. The idea is you show your employer you’re worth something and move up the ladder. Why didn’t his father tell him all this years ago?

So our poor, suffering friend here wants a cushy writing gig because mundane jobs will cause him to go into meltdown?

At this point both Julia and I have heard enough:

What was interesting is how many commenters expressed sympathy with the guy rather than telling him to buck his ideas up and stop moaning. A number took issue with Julia and I, admonishing us for not being supportive to Mr Johnson.

Does everyone remember that post I wrote back in summer about modern parenting methods? Well, this is the result, folks.

47 thoughts on “A Profile of a Modern British Man”