In the wake of a gun massacre in the United States one thing is absolutely certain: sensible commentary is almost impossible to find, particularly in the mainstream media.

An exception is this excellent thread doing the rounds on Twitter:

First, the sale of new fully-automatic firearms was effectively banned in 1986 under the Hughes Amendment. https://t.co/la0nHvpyyq

It is worth clicking the link and reading the whole thing. Judging by the noise and the scale of the carnage, the lunatic in the hotel in Las Vegas was using a fully-automatic weapon of the sort that has been banned from being sold new since 1986. Yes, you can buy ones that pre-date the ban, but you’ll have to pay a lot of money and be subject to a rather thorough background check by the FBI. As I understand it, this is a federal law and is not affected by differing gun laws across the states.

It would have been nice if at least some of those now shooting their mouths off understood all this, wouldn’t it? The Independent had this to say: 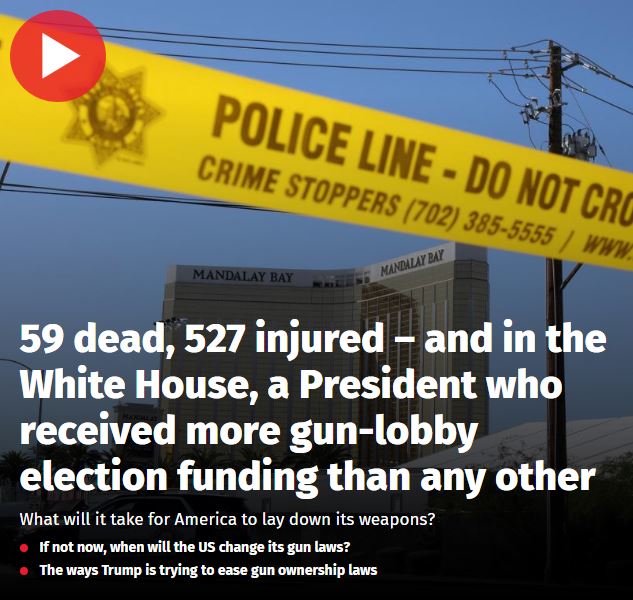 As if a man massacring people with what is almost certain to be an illegal weapon has anything to do with gun laws. I’ve written at length about gun control in the US here, and I haven’t got much more to add on the subject. It is going to be extremely interesting to see what weapons this monster used and where he got them, though.

The hatred of the NRA is also an interesting one. The sort of people who complain about them usually have no problem with the thousands of other lobby groups who conspire against the general public in order to benefit a sometimes very small number of people. And the one thing that can be said about the NRA is that it does represent a lot of people, around 5 million or so. Okay, that’s nothing as a percentage but it’s a lot in terms of raw numbers, and far more representative of a lot of special-interest groups that lobby politicians. Also, the amount it spends isn’t that much either:

In federal elections, the NRA typically ranks among heavyweight outside spending groups. For the second cycle in a row, it has earned a place in the top ten. But 2016 was a unique year for the organization, owing to the fact that many super PACs, like Karl Rove’s American Crossroads GPS, which spent roughly $115 million to elect Mitt Romney in 2012, declined to back Trump. The NRA stepped in to fill the void, putting at least $30.3 million on the line to help elect the real estate mogul, more than any other outside group — including the leading Trump super PAC, which spent $20.3 million.

So let’s call it $30m. Sure, that would pay off my Sakhalin bar bill but when we consider that Trump received $408m in campaign funds and Hillary $795m, it’s a bit of a stretch to say the NRA has America by the balls. I think what liberals really hate about the NRA is that it’s seemingly immune to the SJW infiltration that has seen pretty much every other large organisation descend into ever-more ludicrous levels of virtue-signalling and political correctness. The NRA has stubbornly stuck to its guns – literally – and represented its members interests faithfully as it was set up to do, and refused to bend to the latest emotionally-driven campaign orchestrated by people who would never belong to them anyway. No wonder they’re hated so much.

The other thing that annoys me is foreigners weighing in on how they don’t understand why anyone would want or need to own a gun. Well, I have no idea why anyone would want to go and pray in a mosque but quite a large number of people do. I’ve recently reached the conclusion that people who hail from places which differ from Pembroke politically, culturally, socially, geographically, ethnically, and historically might think differently from me and want different things. And so it is with Americans: they are different, and for whatever reason they like carrying and using guns. If Brits or anyone else can’t understand that, who cares? It’s not their cross to bear, frankly.

26 thoughts on “The Massacre in Las Vegas”