The city of Nantes in the Pays de Loire region consistently ranks highly in the lists of best places to live in France, probably because it is big enough to have all the amenities of a city, yet it is surrounded by countryside and only 2 1/2 hours from Paris by train. Possibly the biggest attraction is that you have a dozen or more beaches and seaside towns within an hour’s drive, making the place great in summer.

The town itself is nice enough and reminded me a lot of Bordeaux: lots of little side streets, cafes, bars, and students. There were also a lot of unwashed hippy-types sitting about in bare feet holding pieces of string with a dog on the end. I’d not seen many of them in France before, but Nantes had plenty. Probably the best thing to do when arriving in Nantes is to walk around the outside of the Castle of the Dukes of Brittany and then find something to eat and drink: being a former port town whose shipyards closed long ago, Nantes is nice but not beautiful. 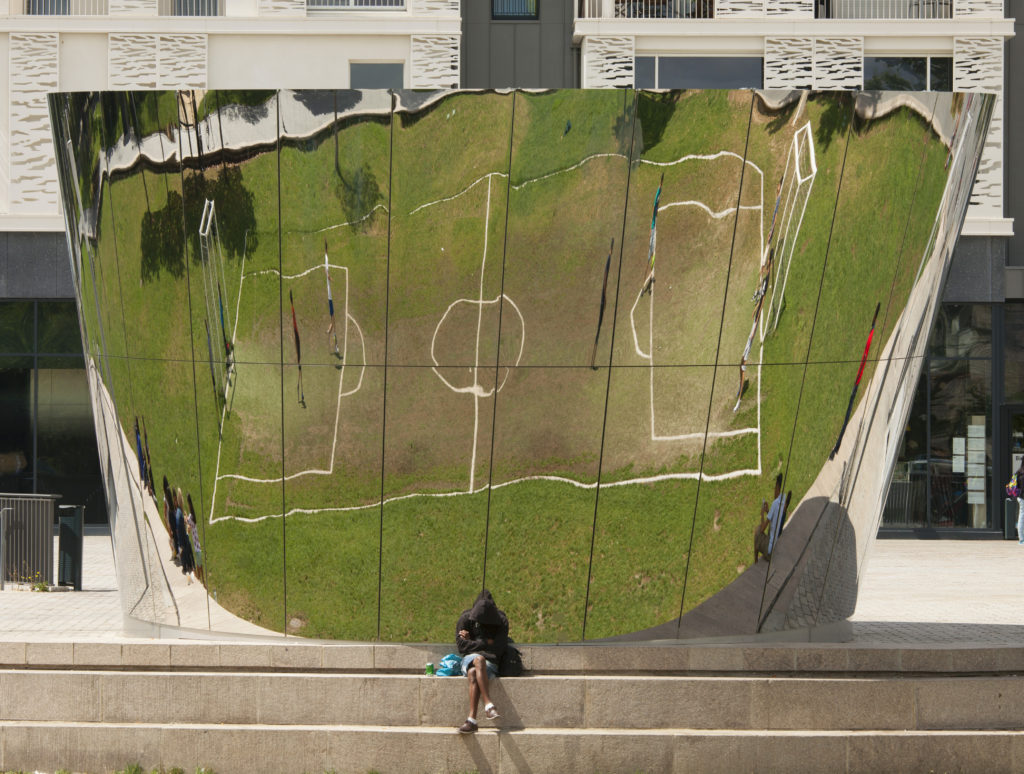 The mirror above was pretty neat. In front was a football pitch laid out in a curve such that the mirror would reflect it as a perfect rectangle.

One of the main attractions of Nantes is Les Machines de l’île, a permanent exhibition of animatronic animals built in the steampunk genre in an area of reclaimed dockyards near the city centre. The most famous of the exhibits is a giant mechanical elephant which carries passengers on a journey of a few hundred metres every hour or so. 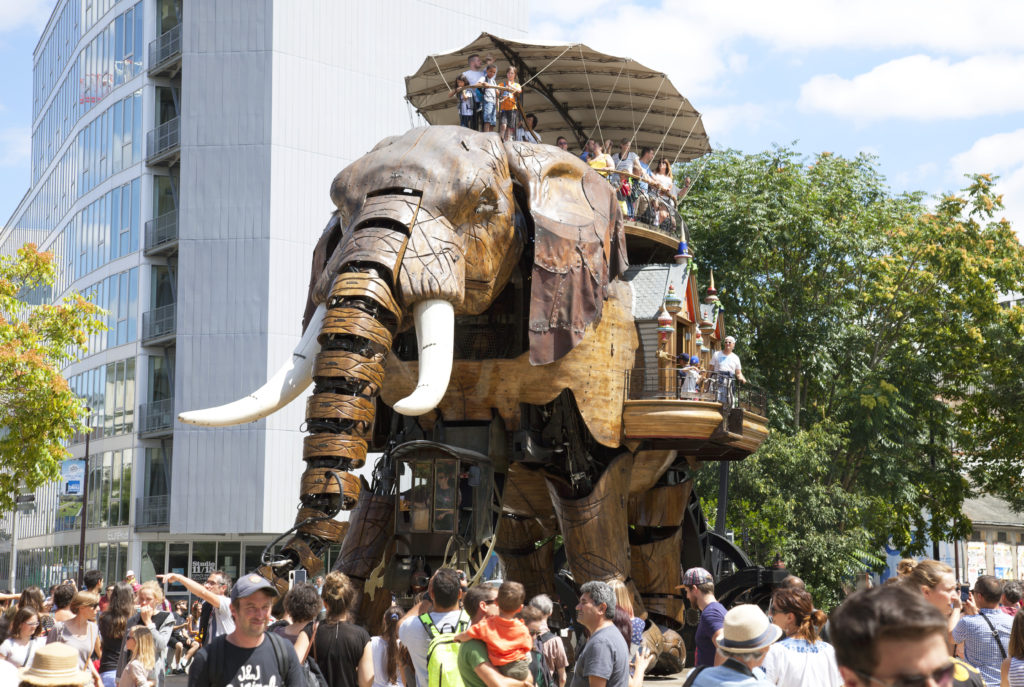 It’s both a fantastic work of art and feat of mechanical engineering. Driven on wheels by electric motors, hydraulics make the legs move giving the impression it’s walking. A combination of pneumatics and hydraulics make the head, ears, and trunk move. Were this in Australia the people following would be stood two hundred metres away behind barriers, but in France people are still allowed to have fun so everyone walks alongside or in front, with the kids getting sprayed with water from the trunk. A security guard sort of ushers people out of the way, but otherwise you can get pretty close. To be fair, the thing moves pretty slowly and you’d have to be trying pretty hard to get hurt.

Inside there were some smaller animals, including a mechanical ant which I’d seen a year before at the Paris Maker Faire. 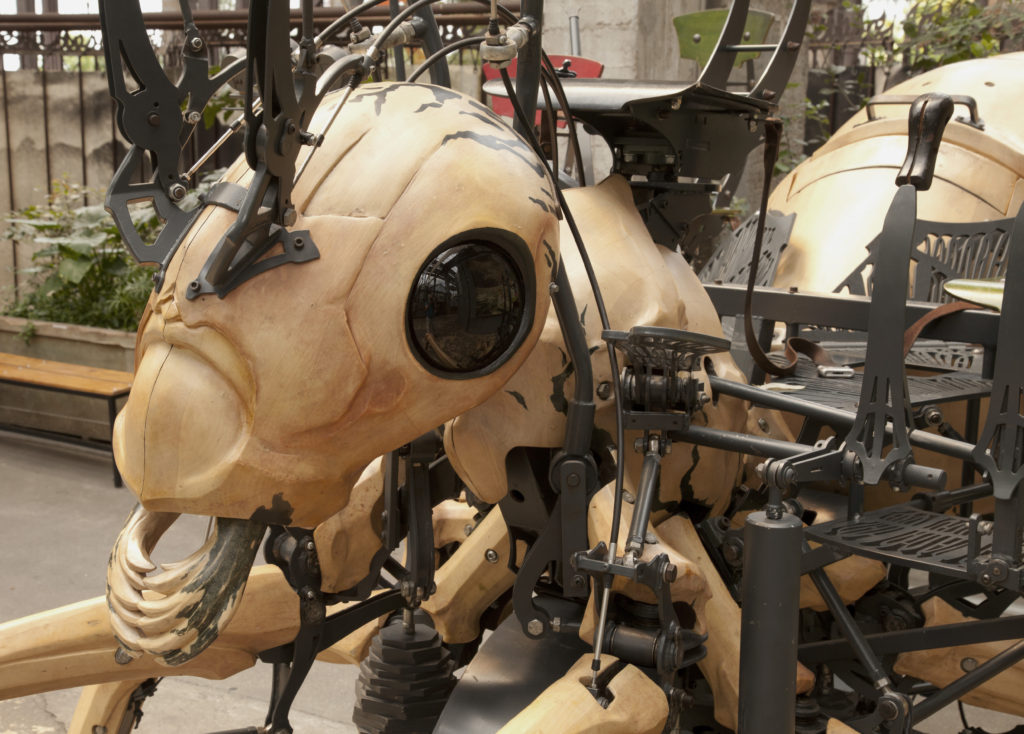 There was also a caterpillar, a heron, and a giant spider each of which could carry a handful of passengers who, by pulling various levers, could make the animals’ appendages move in a realistic fashion. The whole exhibition was an excellent combination of aesthetically pleasing arts and complex engineering, something which is never easy to pull off.

Afterwards I went for a short walk along the slipways of the old docks, where the city has adopted and preserved an old crane as a reminder of its industrial heritage (If you look carefully you can see the elephant on the left). 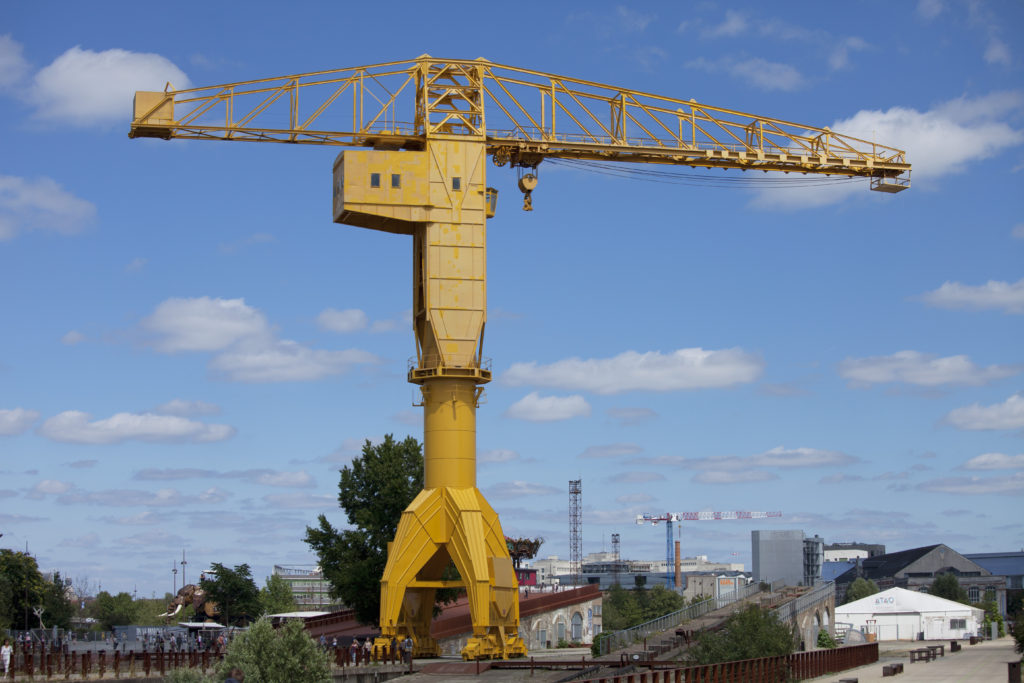 That evening I watched footage of the flypast in Paris and Trump causing lefty heads to explode by complimenting Macron’s wife on her figure. I was hoping he’d rumble down the Champs Élysées in an Abrams tank, crushing a few vehicles on the way, but instead he turned up in a limo. Back in Nantes, the municipality laid on a firework display in the castle for the Bastille Day celebrations. Judging by the crowd, the entire city turned up to watch them. 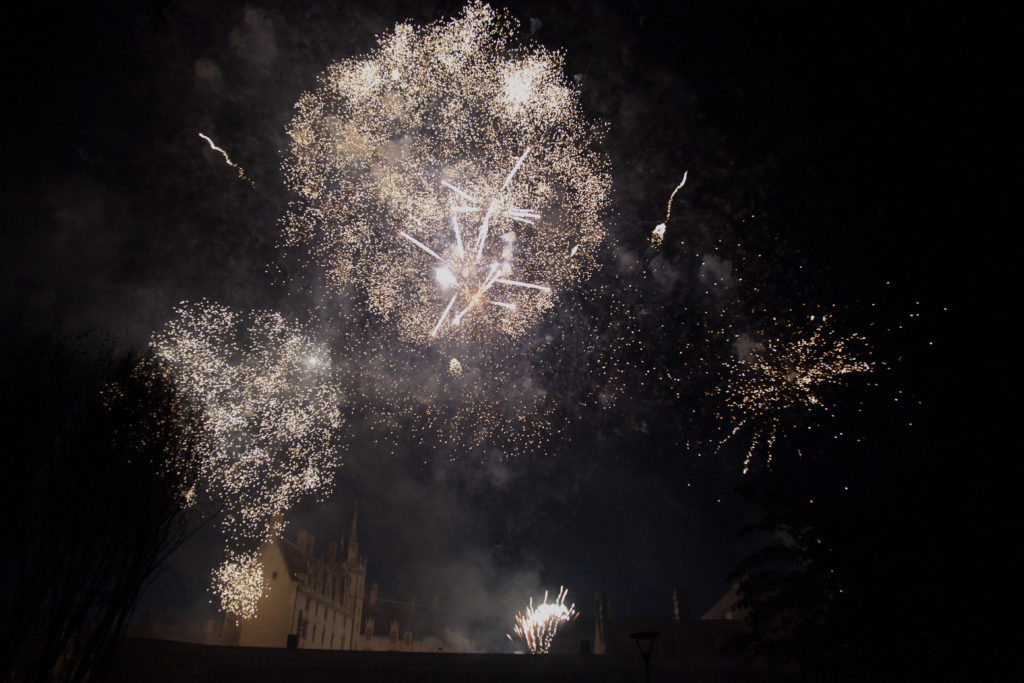 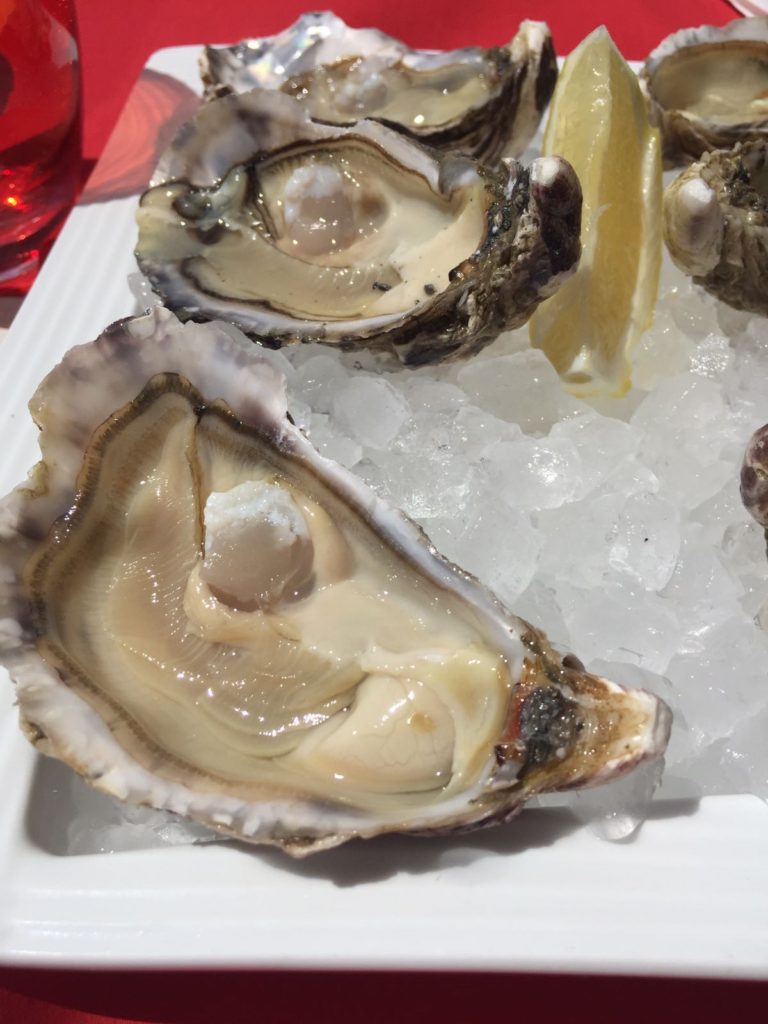 France is probably the only place I’d eat oysters, and the Atlantic coast is the only place I’d make a point of eating them. Meaty, cheap, and delicious they were. As I found with other small coastal towns in France, the visitors are almost exclusively French so you can safely eat in a restaurant which looks “touristy”. You’d not want to do that in one of the more famous towns like Etretat or Le Mont Saint Michel, where the menu will be laminated and in sixteen languages with Russian and Chinese near the top.

Pornic was a nice place, even with the tide out. 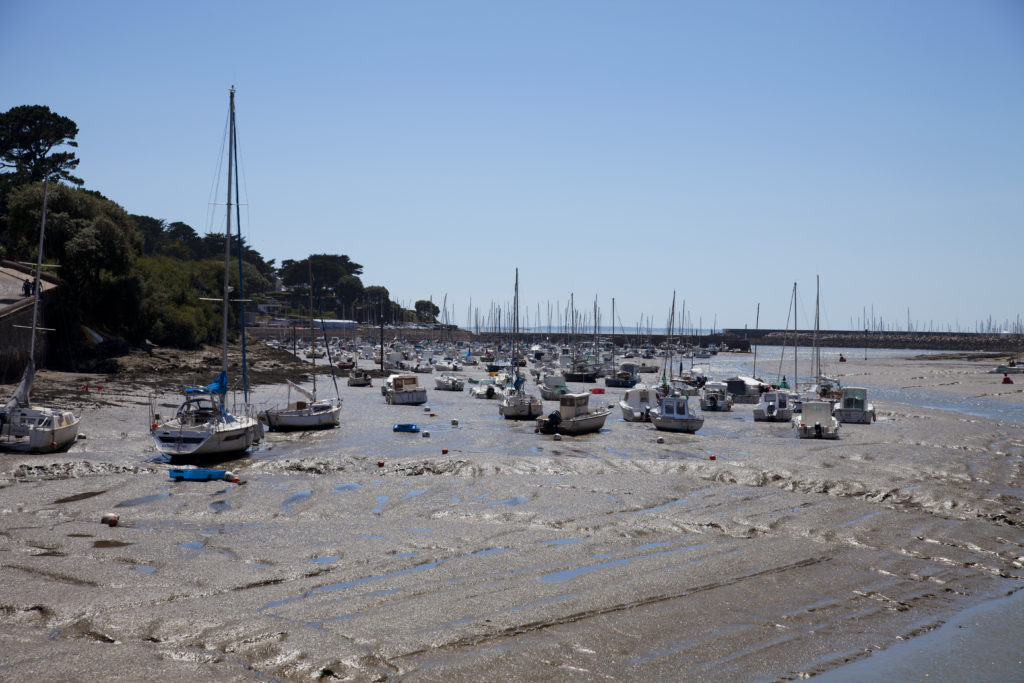 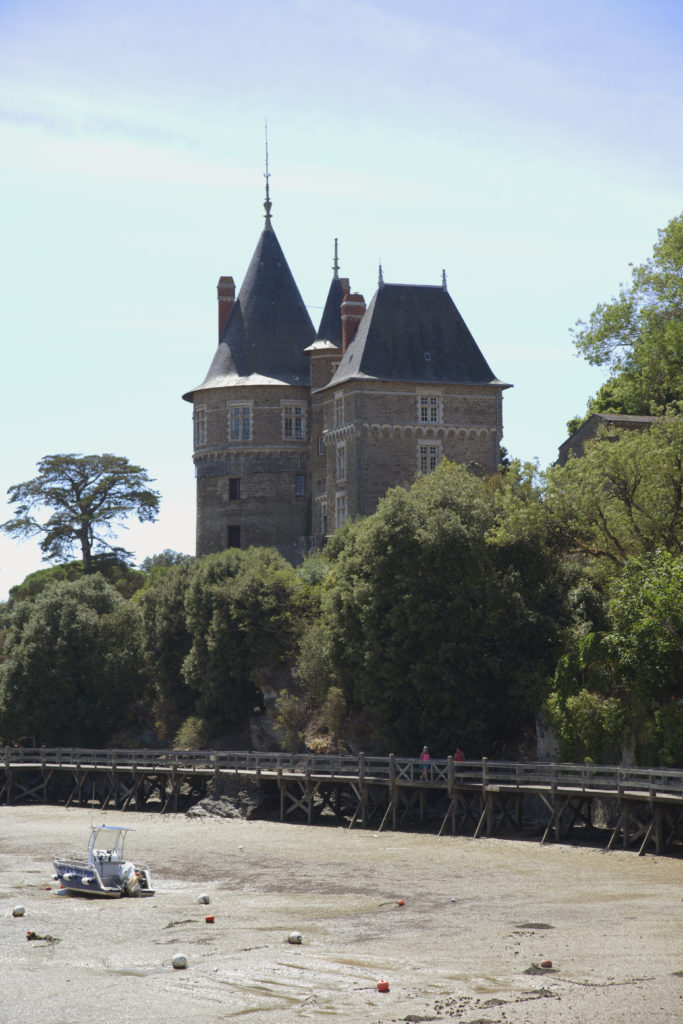 On the way back to Nantes I stopped at the Réserve Naturelle de Grand-Lieu, which is basically a lake. 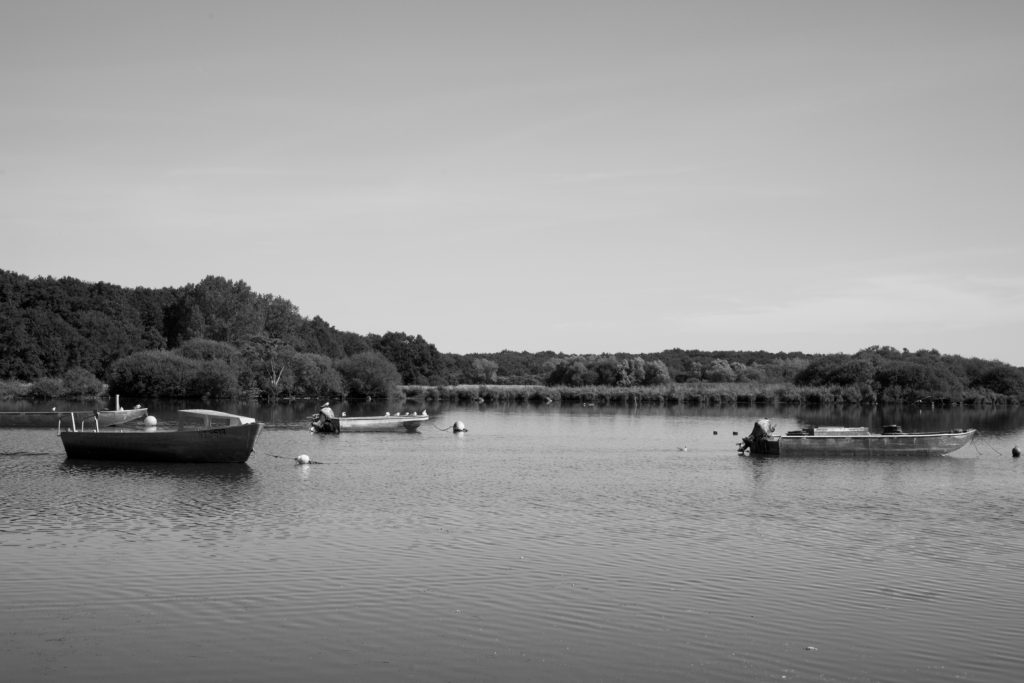 It was nice enough, but what I most enjoyed was coming across a field of mowed hay and taking in the smell of it. Then a tractor pulled up with a hay-turner and I stared long enough for the driver to hop out and ask me if I was wanting anything in particular. I explained that I’d grown up around farm machinery and, living in Paris, I missed it. He sympathised, but not enough to immediately put the thing into action for my entertainment. On the drive back I passed a dozen or so fields of wheat being harvested, dust flying everywhere.

Just for fun, here’s a pic of me with the elephant. 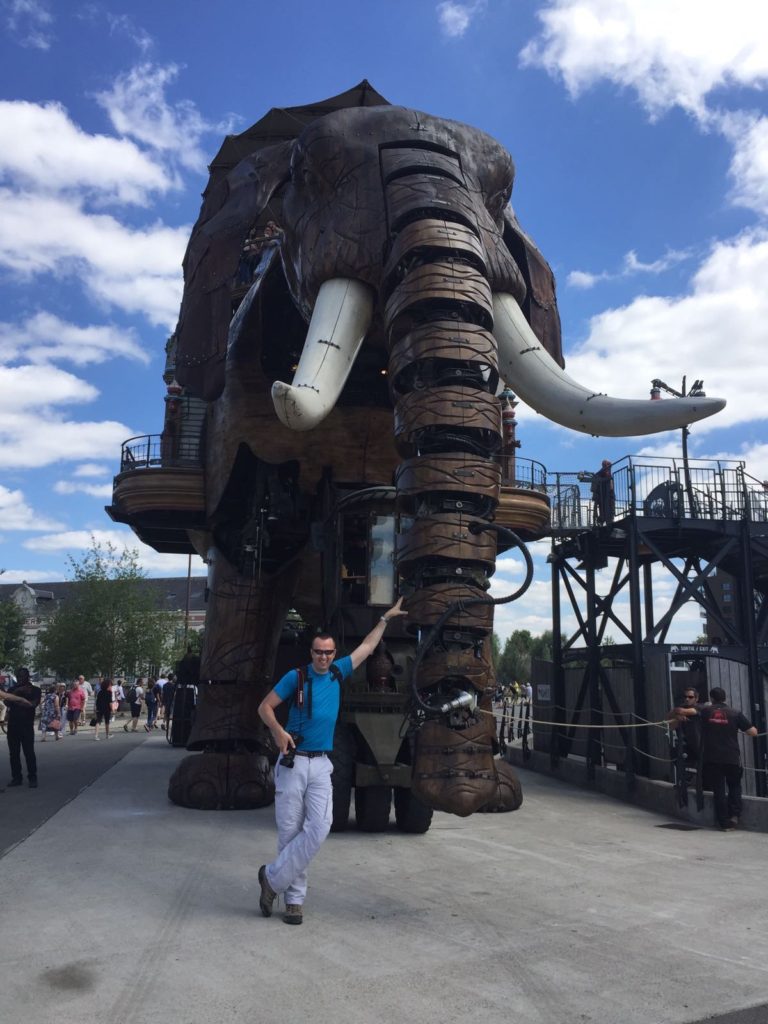 (The rest of my photos from this trip can be seen here.)