A few weeks ago I did something that, I think, I’ve never done before: I went to an art gallery specifically to see an exhibition I was interested in. Last year I was dragged around a display of badly-crafted junk and paint ejaculated at random over dirty patches of canvas in what was called a modern art exhibition in the Palais de Tokyo, but other than that I don’t think I’ve ever been to an art gallery. And yes, that includes the Louvre to which I have free access and I don’t need to queue, thanks to my employer shovelling a load of money in their direction at some point. I also skipped the Hermitage every time I’ve been in Saint Petersburg. Those scraping sounds you can hear are my knuckles dragging on the floor as I hunt for my banana.

This one was different, though. I saw it advertised on the metro, and immediately took an interest. The subject was American Painting in the 1930s and it was being held at the Musée de l’Orangerie. What caught my attention was their use of Grant Wood’s American Gothic in the poster: 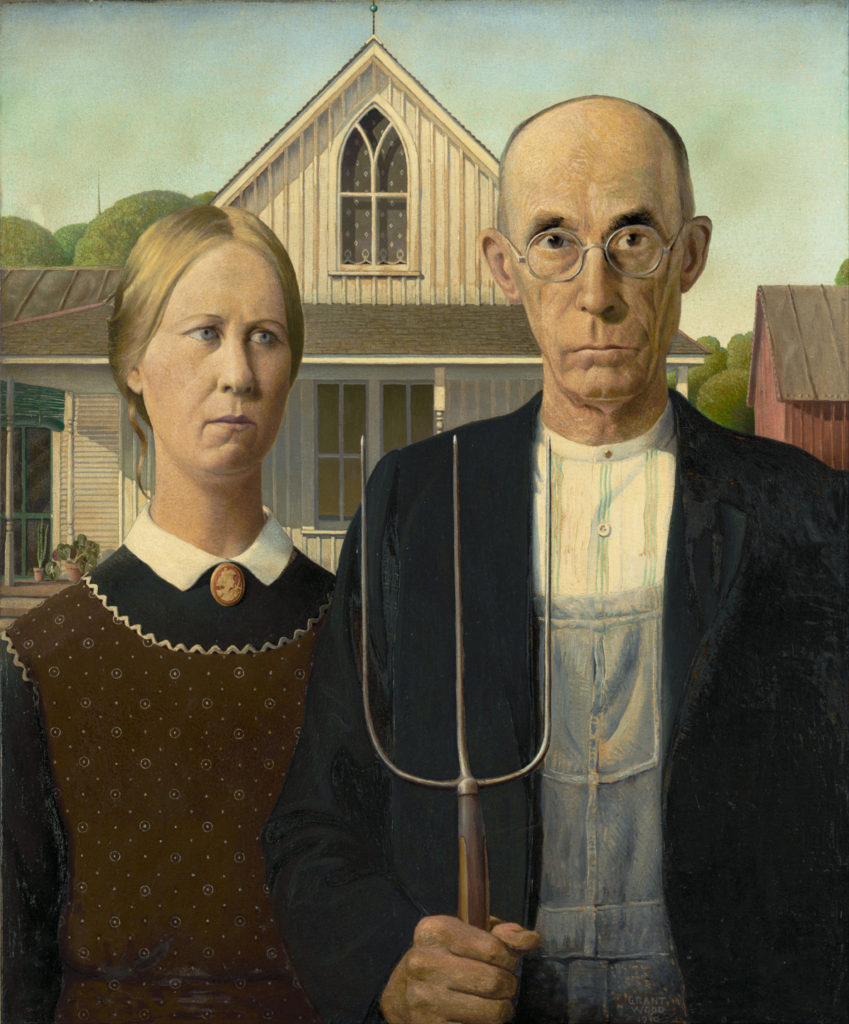 I can’t say I was familiar with this painting beforehand but I had seen it occasionally and rather liked it, and I was curious to see what else they had on display. So along I went, and I wasn’t disappointed.

It helped that I knew about the era in question to begin with. I’ve read The Grapes of Wrath and Of Mice and Men, and noted other cultural references such as Brother, Can You Spare a Dime and the more recent Cinderella Man. I’m also fairly clued up on the history of America’s industrial development, which meant I could recognise the names and roles of companies, brands, and cities that were depicted in the paintings.

Quite a few of the paintings, particularly those created by the aforementioned Grant Wood, depicted rural landscapes and the agricultural life which was clobbered by the Great Depression and the dustbowl conditions. I probably found these the most interesting, originally hailing from a farming region myself (albeit one considerably wetter). I was interested to note that one of them – Fall Plowing – was owned by the John Deere Art Collection and depicted an abandoned plough. 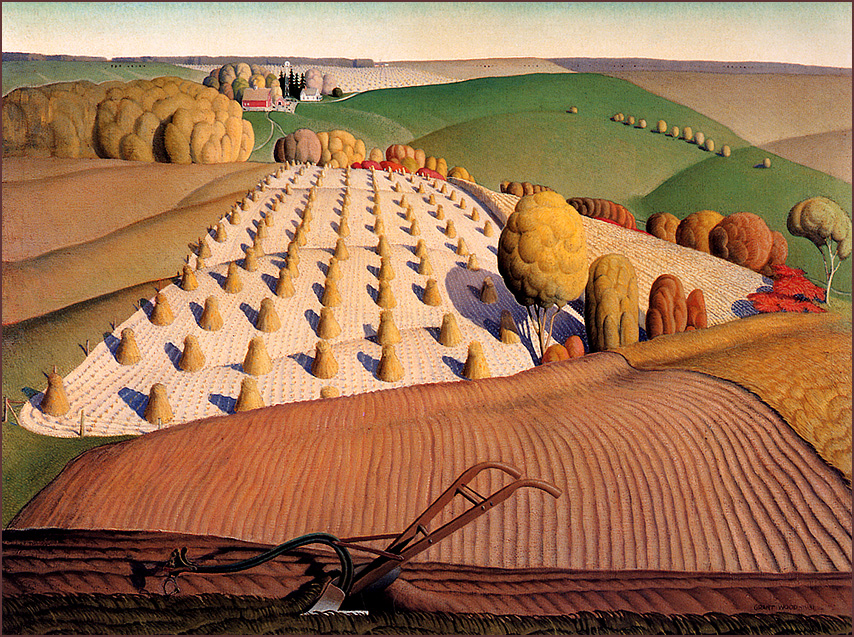 I then proceeded to bore by companion with an (inaccurate) explanation of who John Deere was and the huge developments in the mechanisation of agriculture that occurred in the US following WWII. 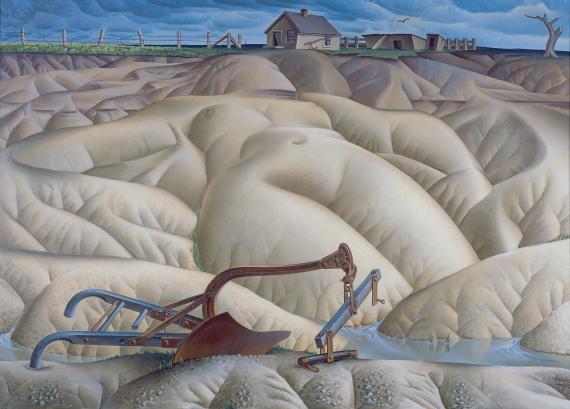 Another section concentrated more on the political side of things, with a lot of the painters having obvious Communist sympathies – hardly unusual for the time (or now!). A particularly good painting was Peter Blume’s The Eternal City. 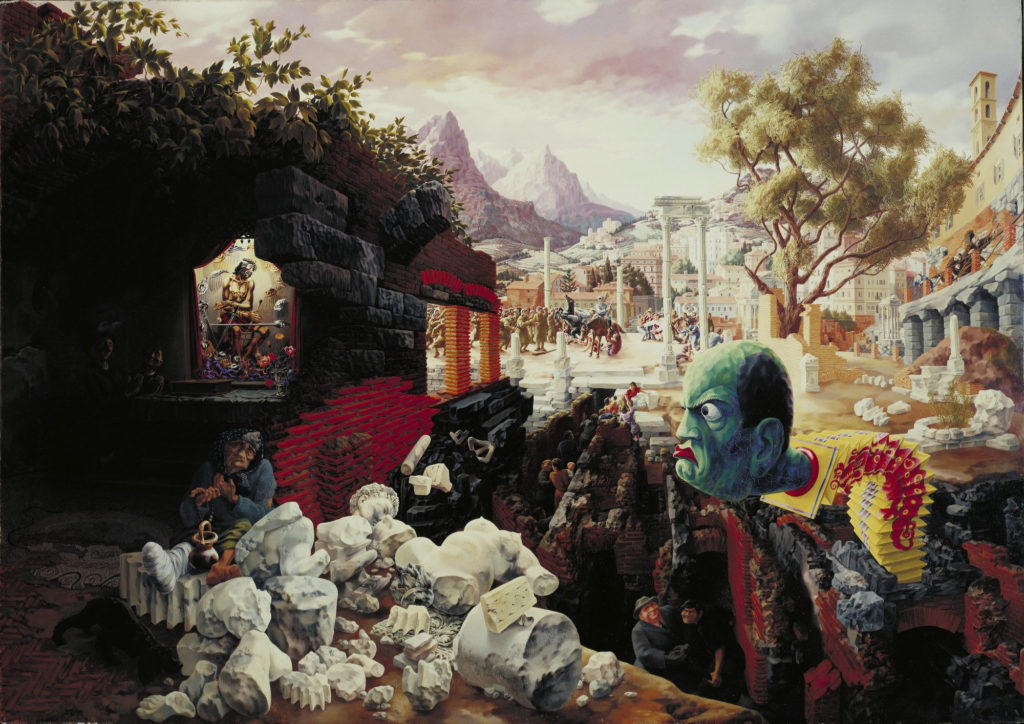 The picture above simply doesn’t do the colours justice. The man in the room on the left was painted so well that the original makes it look backlit, and the turquoise of the head (Mussolini’s, I think) was almost fluorescent. One thing that was obvious from this collection was how much better the paints were compared to artworks of previous eras and how much better preserved they are. Not being hung for a century in a room with an open fire probably has something to do with it, though.

Philip Guston’s Bombardment, which depicts an aerial attack during the Spanish Civil War, was also very good. Again, the picture below doesn’t do the colours justice. 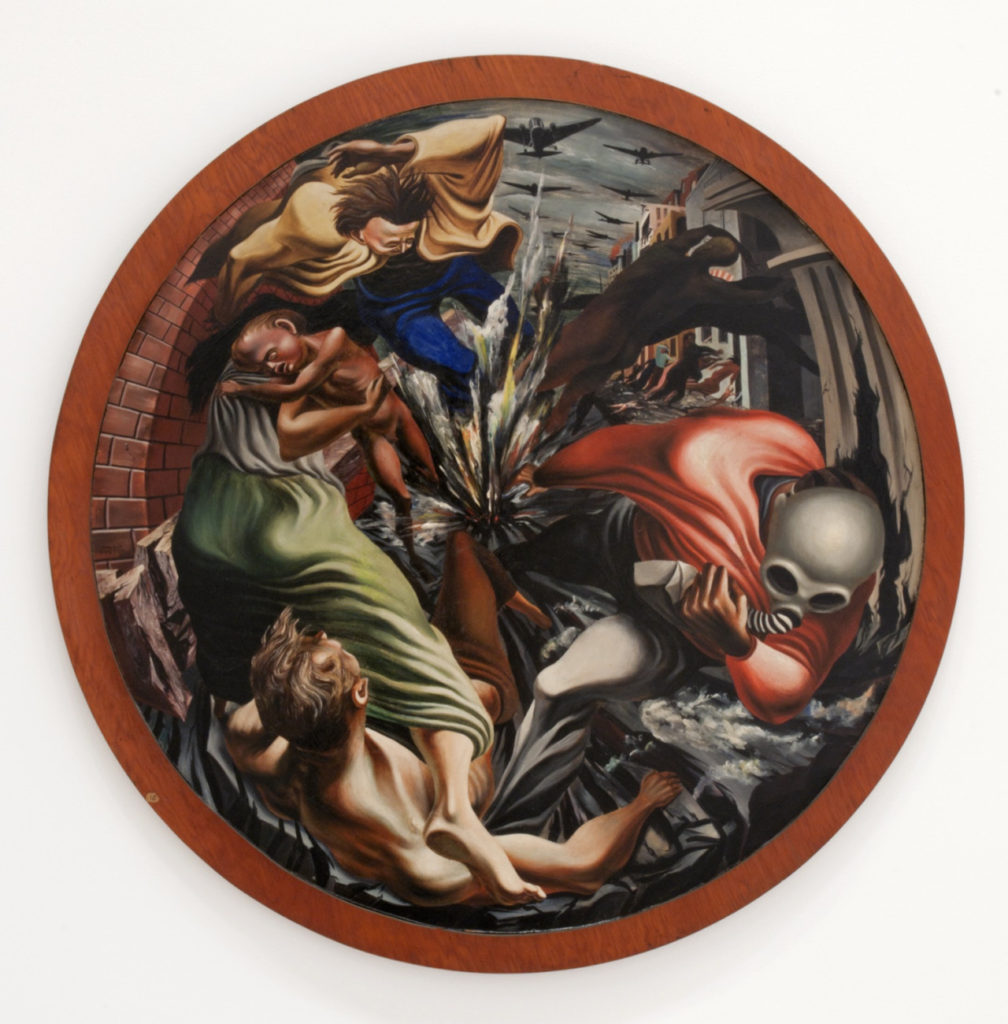 The exhibition tour finished with a projector on a loop showing clips from films of the era including Gone with the Wind, The Wizard of Oz, and The Grapes of Wrath among others. I believe the purpose of this was to emphasise how much the Great Depression influenced American culture, and it showed there were two elements to this: works showing its terrible effects and those depicting hope and the country’s eventual climbing out of it.

The exhibition is finished now; I went on one of the last evenings and it was packed. If everyone else’s experience was like mine, it is easy to see why. It was excellent, and I think it’ll be a long time before I am as impressed by what is hanging on the wall of an art gallery. Hopefully that scraping sound has softened a notch.