My trip to Kiev was nice, but very short.  Snow had fallen in Kiev the morning of my departure, leading to flights out of Boryspil airport being delayed.  Perhaps the Ukrainians were taken by surprise by this sudden onset of wintry conditions having expected balmy summer days until next May, but it reminded me of the time when I was delayed 5 hours in Sheremetovo airport on my way back to Sakhalin from Istanbul because snow had arrived in Moscow.

Anyhow, I lost two hours of my Friday evening and it was dark when I arrived.  I had a choice of taking a bus from the airport to my hotel in the city centre for about 2 Euros which would take about an hour, or a taxi for 20 Euros which would take half that.  This was the first inkling I got that Ukraine was on that rapidly-shrinking list of countries that are still very inexpensive.  I plumbed for the taxi.

As is now the case in Moscow, almost all the cars I saw on the road were foreign-brands, and only a handful Russian.  The roads and signage and other paraphernalia were well maintained, telling me Kiev has emerged from the decrepit post-Soviet era along with the Baltic capitals I visited 4 years ago.  I have no idea if this is the case in Belorussia, but it would be interesting to find out.  I saw plenty of signs of foreign investment, the French ones catching my eye: Credit Agricole, BNP Paribas, Auchun.

Saturday dawned bright and sunny and I spent the day walking around the main sights of the city centre, which consisted mostly of nice looking Orthodox churches. 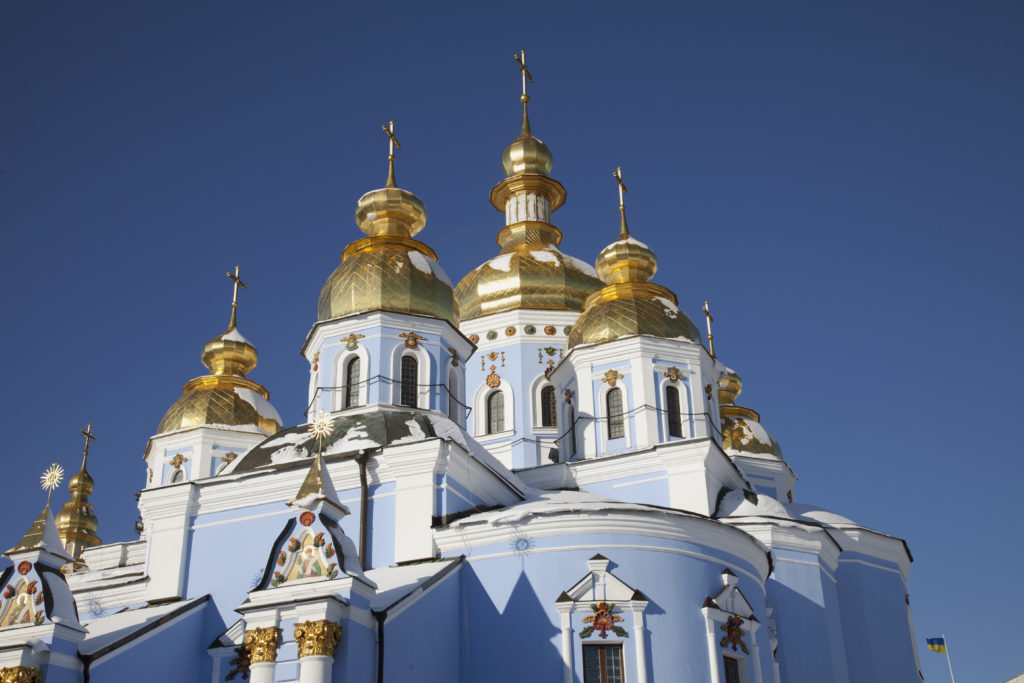 It was cold.  The actual temperature was only -5C or so, but that’s as cold as I’ve experienced outside a ski resort in a long time, and any residual toughness from my time in Russia disappeared years ago in the heat of Thailand and Nigeria.  I had the right clothes on, but I was not tempted to stay outside too long hence I didn’t see all that much of the city.

I was surprised by how small Kiev was.  I didn’t see the suburbs, but the city centre didn’t seem that big and I was amazed – on a late Saturday morning – by how few people or cars were about.  There didn’t seem to be any traffic even on the city’s main boulevards, which isn’t the case in most capital cities.  For some reason I’d gotten the idea it was a giant megalopolis approaching the size of Moscow, but it was actually far smaller.

Below is a picture of Maidan Square, the location for both the Orange Revolution in 2004/5 and the Euromaidan protests in 2013. 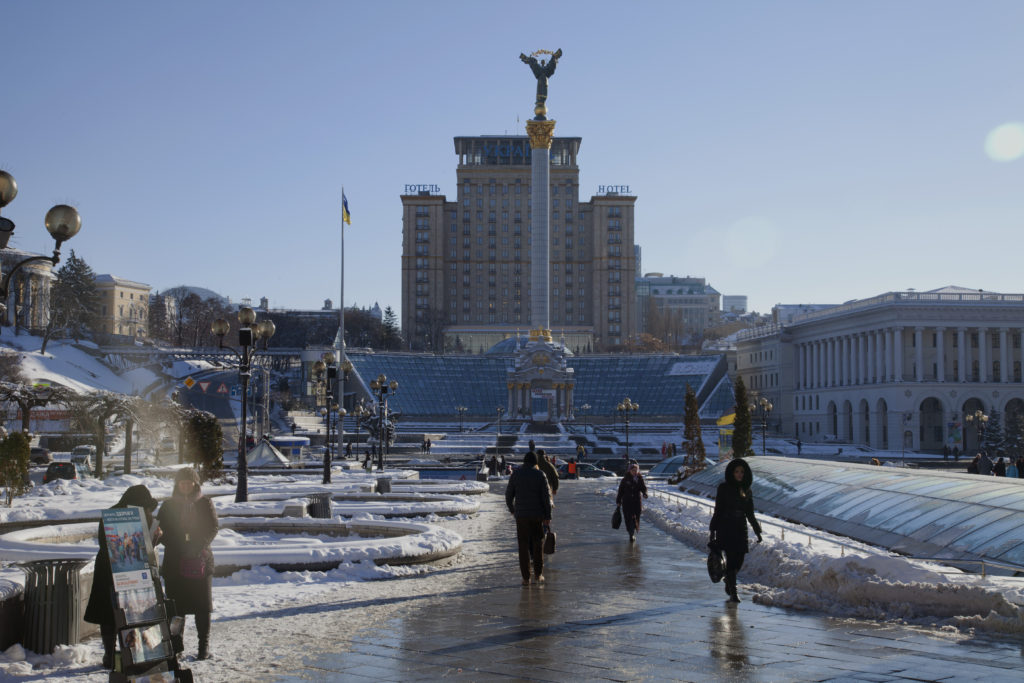 The place was deserted.  One thing that struck me when standing in that spot was that Ukrainians ought to schedule their protests a little better: both took place at roughly the same time of year I was, and I didn’t envy them camped out in the snow.

I was speaking Russian, not knowing a word of Ukrainian, and I from what I could tell there was a lot of Russian spoken.  I’m not sure if I could have told the difference, but on the few occasions I asked I was told it was Russian.  Which is to be expected, of course.  There were signs of the tensions between Ukraine and Russia though, some more subtle than others.  I noticed among a hundred brands of vodka on sale in a supermarket there was no Russki Standardt, nor was there Baltika in the beer section.  And the kiosks in the subways were selling rolls of toilet paper with Putin’s portrait on each sheet.

The food was good: I had two bowls of borsch, which is pretty much compulsory when visiting Ukraine, but couldn’t detect any difference from those I ate in Russia.  Although bowls of borsch are like snowflakes, no two are alike.  If you ever want to start an argument among Russians (and presumably Ukrainians) just for fun, ask two of them to tell you how borsch should be made properly (this also works with salad Olivier).  And the food was cheap: after years of Paris prices, it seemed it was almost free in Kiev.

I took a few photos, some of which are not bad, but they’re nothing special.  It was too cold to walk slowly, hunting around for unusual things in the back streets, and operating an SLR camera with gloves on isn’t easy.  I snapped the main sights I came across, and that was about it. 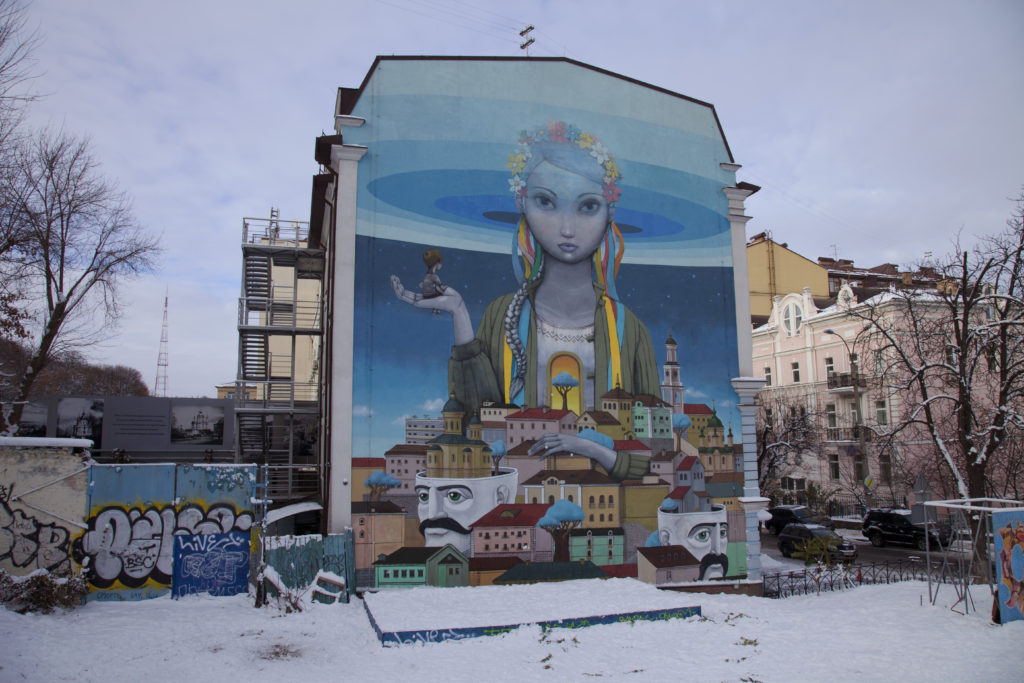 For those that are interested, the full collection of my photos of Kiev are here.

All in all it was a nice trip, and Kiev is worth a visit.  Only it would be a lot more sensible to visit in summer rather than winter, which is what I said when I came back from the Baltic States in late December.  Although there was something nice about the snow coming down and stirring memories of Russia, a place I’ve not been to in 4 years now.  My only regret is I didn’t go to see the Mother Motherland statue, which I completely forgot was there, but I’d probably have frozen to death if I’d tried.  Next time, perhaps.

10 thoughts on “A Weekend in Kiev”