Once again via David Thompson, this article by Michael Totten on the ludicrous state of modern art is worth reading in full, and is fully consistent with what I wrote here.

The bit I want to discuss here, though, is this:

By obsessing over politics above all else, identitarian artists of the twenty-first century resemble the Socialist Realists from the Soviet Union in the early- to mid-twentieth century. One could charitably call Socialist Realism an artistic style, one that glorified peasants, factory workers, and Communist values, but it was nurtured by a totalitarian police state and was the only “style” allowed by the government lest hapless artists wished to live out the remaining days of their lives in a Siberian slave labor camp.

At least the Russian Socialist Realists were talented artists. They produced totalitarian propaganda, yes, but they did it competently. Their paintings are interesting and engaging, and not just because they’re curious historical artifacts.

I actually quite like the Soviet Realism art, not so much for aesthetic beauty but, as Totten says, for what they represent historically.  I particularly like those in this sort of style: 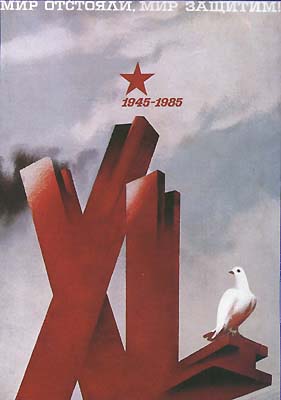 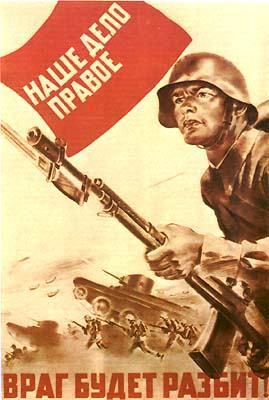 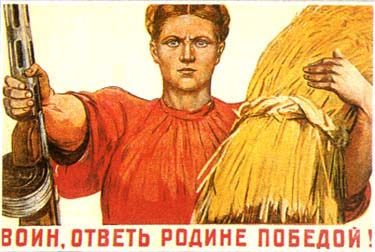 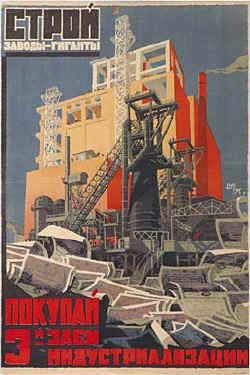 Of course, one must understand that they represent bullshit propaganda of the highest order in support of an abominable regime, but that doesn’t necessarily mean they are not engaging and, in the context of what they represent, historically interesting.  And the artists who created them undoubtedly had considerable talent and skill.

I remember once searching the internet for a story related to the Waffen SS and stumbling across websites and forums devoted to this and other German units, full of people posting photos and pictures of various artifacts from WWII.  I wasn’t surprised, but was rather glad, that the sites weren’t centres of Nazi worship but were instead frequented by incredibly nerdy blokes who simply had a historical interest in the Waffen SS and its symbology.  As, I must confess, do I up to a point: I have a huge hardback book full of photos of the Waffen SS which I picked up at a jumble sale years ago, and it’s a good one.  What I don’t have, however, is a giant Nazi flag hanging up on my wall and an admiration for their policies or methods.

I had to make a similar distinction when I found myself interested in the Soviet Union (my obsession with Russia was always more an obsession of the Soviet and immediate post-Soviet eras; modern-day Russia doesn’t interest me much any more, having now lived in it).  I used to buy items with the Soviet symbols on them, and sometimes even wear them:

Which, I hope, didn’t make me the same as the middle class twats who display the hammer and sickle when screaming “Smash the State” in central London.  I’d not wear the hammer and sickle any more, or really anything Soviet, because my obsession has declined and I’ve grown up a bit and now wear different clothes.  But I still find myself admiring Soviet symbols and artwork, such as this which is on the wall of an old Pioneer camp just south of Yuzhno-Sakhalinsk (I wrote about it here back in 2007, I don’t know if the camp and its murals still exist). 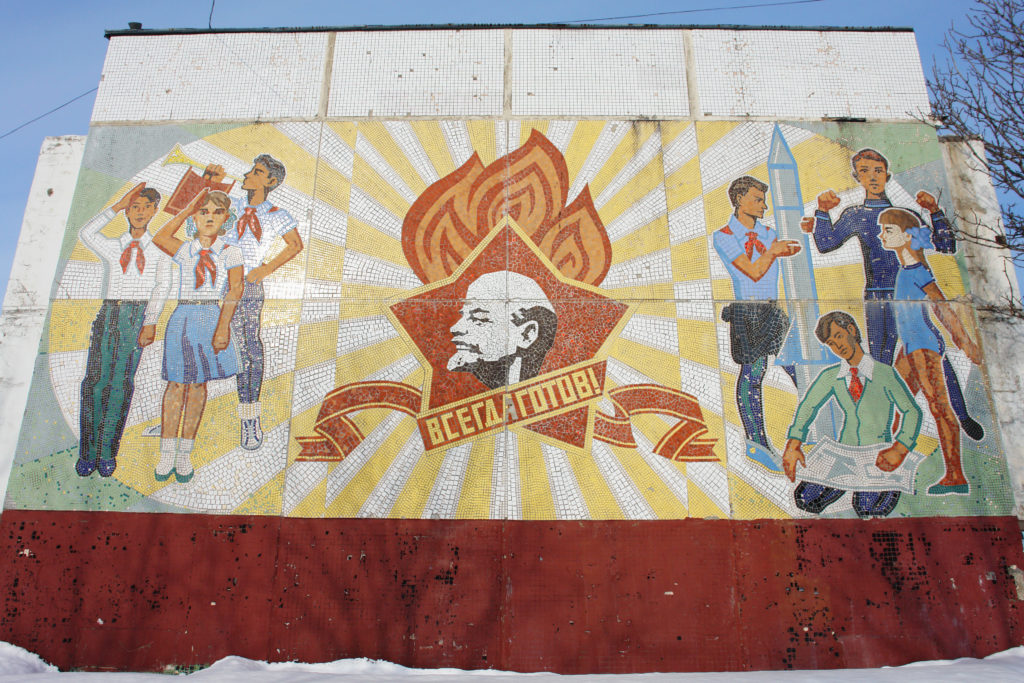 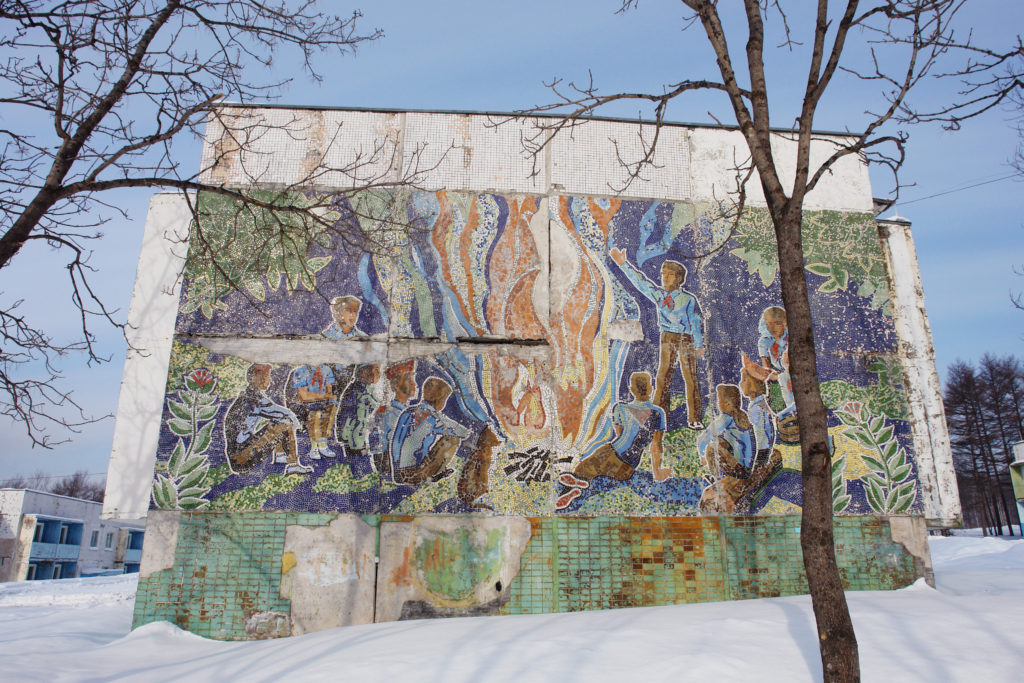 And also this wonderfully optimistic mural which I found in the Sakhalin town of Nevel’sk: 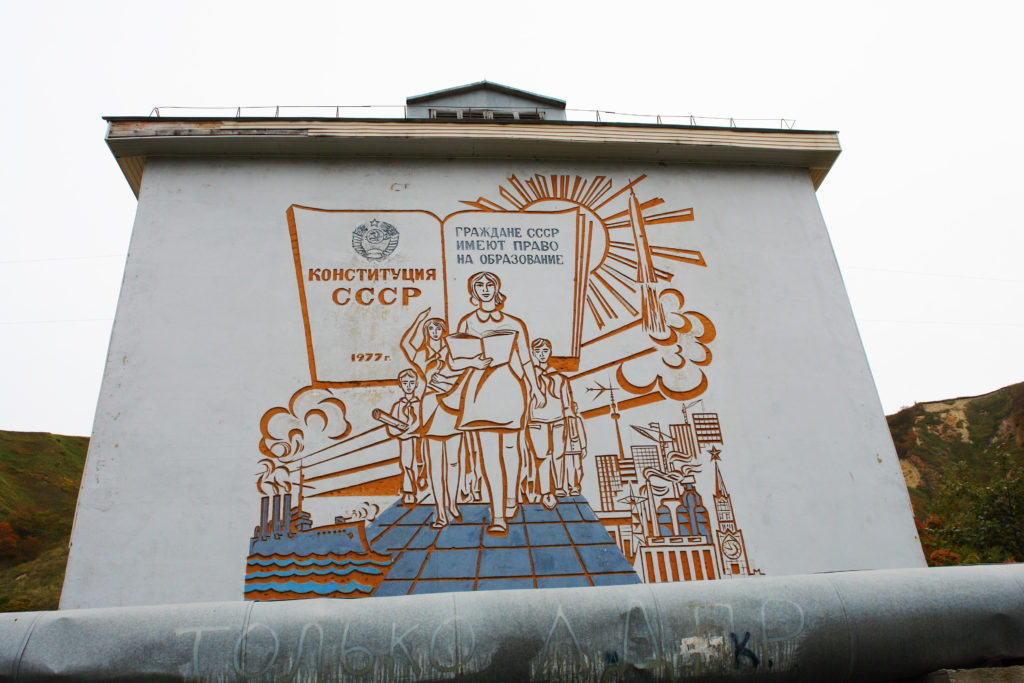 What I still find fascinating about Soviet art and other aspects of Soviet culture is that they belong to a country which simply no longer exists.  People say the past is another country, but in the case of the Soviet Union this is literally true.  Culture changes with time and you can visit any country and see its cultural history, but I think the Soviet Union is the only country I can think of which ceased to exist – taking its artistic culture with it – almost overnight.  What emerged from the wreckage in the form of the independent states retained aspects of the Soviet culture to varying degrees, but in all cases they were fast moving in the other direction leaving vast swathes of cultural history abandoned, owned by nobody and claimed by nobody.

You can still see it, especially the well-made examples such as those on the Moscow metro system, but even they seem increasingly alien as modern Russians prefer to commemorate different eras of their history.  Eventually Lenin’s body will be carted away and buried somewhere, the murals will fall into disrepair or be replaced by something more modern, and the last remaining Soviet citizens will die out, taking with them the memories of films, plays, and music which nobody else would even understand.

Except this rather odd Brit, of course.