Like NKVD chiefs under Stalin and Hamas leaders, it appears being governor of Sakhalin oblast’ is a risky business:

Alexander Khoroshavin, the governor of the Sakhalin Region in Russia’s Far East, has been arrested along with three of his associates on suspicion of taking a substantial bribe. According to an investigation into Khoroshavin’s activities, the governor received $5.6 million for his part in approving a contract for the construction of a local thermal power station.

On March 4, law enforcement authorities searched the government building of the Sakhalin Region as well as Khoroshavin’s official residence, dacha and apartment in Moscow. In the course of the investigation, the agents found large sums of money, as well as a large amount of valuables.

Khoroshavin had held the post since 2007 when his predecessor was forced to resign, allegedly due to non-action when an earthquake struck the island but possibly because he “wasn’t persistent enough in the battle against foreigners”. I blogged about this here.

This being Russia, the arrest took place as depicted in the picture below: 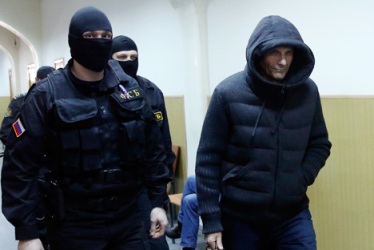 Because having FSB agents dressed like the Provisional IRA arresting a governor decked out like a football hooligan does wonders to dispel stereotypes about Russian law enforcement.