I knew that this BBC article would be bollocks as soon as I saw the headline: Halliburton reports $622m profits. The first thing you see is this picture: 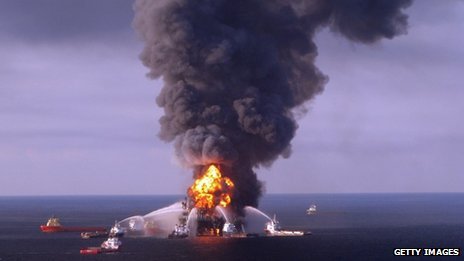 With the caption: “Halliburton was one of the contractors involved in the BP Gulf of Mexico oil spill in 2010″

And you know immediately that the point of this article is to say “evil, polluting American company makes enormous profits” and allow all the assorted lefties who think the BBC is a national treasure to nod smugly at this further proof that capitalists are raping the planet.

Naturally there is no mention in the article that the US Department of Justice closed its investigation into Halliburton’s role in the Macondo blowout over 18 months ago, imposing a fine of $200k for no more than the unauthorised deletion of a computer record.  Now personally I think this was a complete whitewash on the part of the US government protecting one of its own and dumping as much blame as possible on BP, but the BBC doesn’t say that either.  It just doesn’t mention anything, possibly in the hope that its readers will assume Halliburton continues to shoulder responsibility of some sort.

But the article doesn’t even get the basic facts straight:

Oil exploration firm?  Halliburton is an oilfield services provider, it does not carry out any exploration of its own, as a brief glance at its corporate website would tell you.  Secondly:

The world’s second-largest oil company said net income for the three months to the end of March was $622m (£370m).

God only knows where they got this from.  Aside from Halliburton not being an oil company, even if it were, with a market capitalisation of about $53bn it is an order of magnitude smaller than ExxonMobil ($436bn) or Chevron ($237bn). I’m not even sure it’s the world’s second largest anything, being as far as I know the world’s largest oilfield services provider.  But then this is the BBC, so who knows what they’re waffling on about?  Still, the narrative fits: polluting American oil company makes giant profits.

People are threatened with jail to pay for this shite.