We’ve all been in these meetings.  As a serious technical problem rears its head, somebody who has been involved all along pipes up with “I told you we should have done it like this!”.  And then when a solution has been found, another person – or possibly the same one – gaily announces “See, that’s what I’ve been saying all along!”

From reading the news coverage of the Macondo trial, I’m beginning to suspect Transocean are doing much the same thing:

THE Macondo oil well blowout in April 2010 could have been capped sooner if an initial plan that considered building a three-ram capping stack was followed, according to testimony this week in the BP civil liability trial in federal court in New Orleans.

Robert Turlak, an engineer with Transocean, testified that he worked with the well capping team assembled for the job shortly after Macondo blew.

Turlak said he is an engineer that assembles and tests blowout preventer stacks.

He said he consulted with the well capping team that was embedded in BP’s makeshift crisis office in the WestLake building complex in west Houston.

According to Turlak, a two-ram, then later a three-ram capping stack was discussed as one of the options for halting the well flow from Macondo.

Also among the early options was a BOP-on-BOP, which would run the BOP from either the ­vessel Development Driller II or Discoverer Enterprise on top of the lower marine riser package over the well.

I followed the Macondo incident closely as it was going on, and the possibility of putting a second BOP on top of the first was one of the most obvious solutions.  However, there was a slight problem as shown in the graphic below: 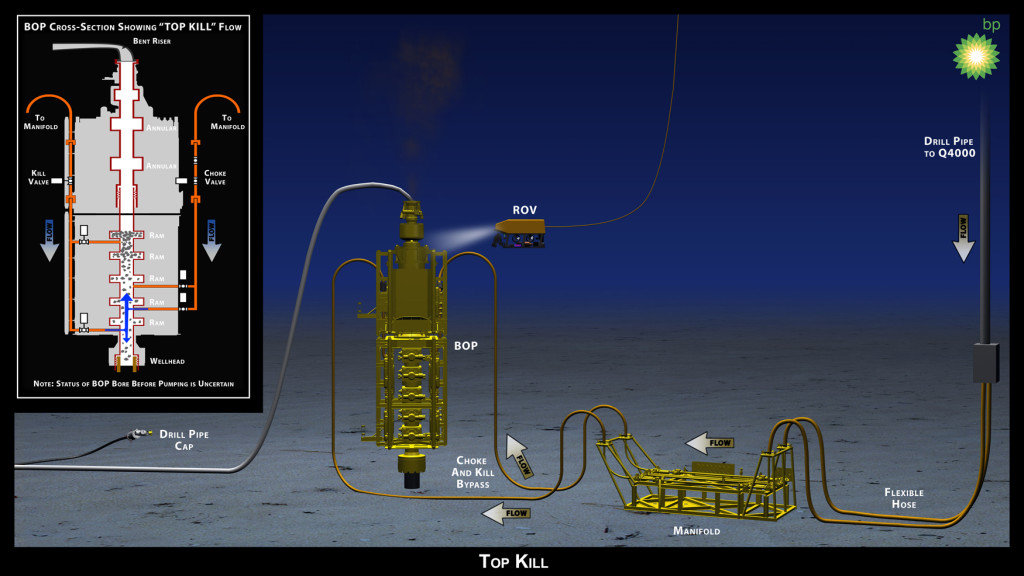 You see that bent piece of riser tube sticking out the top of the BOP?  Well, that’s what was preventing another BOP being placed on the top of the first.  This was mind-bogglingly obvious to everyone right from the outset, and indeed BP did (unsuccessfully) attempt to cut through the top of the BOP using a wire saw in order to get rid of the damaged section.  I know this because I watched the attempt live on the BP feed, along with an awful lot of other interested people.  All of this was done in a very public, transparent manner with everyone chiming in with their two-cents’ worth on various forums and websites.

BP, which led the well capping team, decided instead on a top kill, junk shot and containment dome, all of which failed.

Indeed, but I don’t recall anybody with any knowledge claiming that these were the wrong things to do.  I don’t know much about drilling, but I understood from the commentary at the time that a top kill is the first thing you’d attempt in such circumstances.  There was some controversy over the junk shot IIRC, mainly because some thought it would not work in this instance (and it didn’t).

Turlak indicated that a spool piece would need to be fabricated to connect the capping stack to the well, but he suggested that if he had overseen the job it could have been “forged and flanged in two weeks”.

Hmmm.  Okay, but where would it have gone?  That bent riser tube is still sticking up out the top of the BOP.  The claim that “if I’d been in charge, everything would have gone brilliantly” is a common one in the oil and gas industry, but you generally don’t hear it made in a forum as public as the Macondo trial.  Unless I’m missing something here, this one doesn’t sound very convincing.