In the context of yesterday’s post and the prosecution of Bruno Dey, comes this series of tweets: 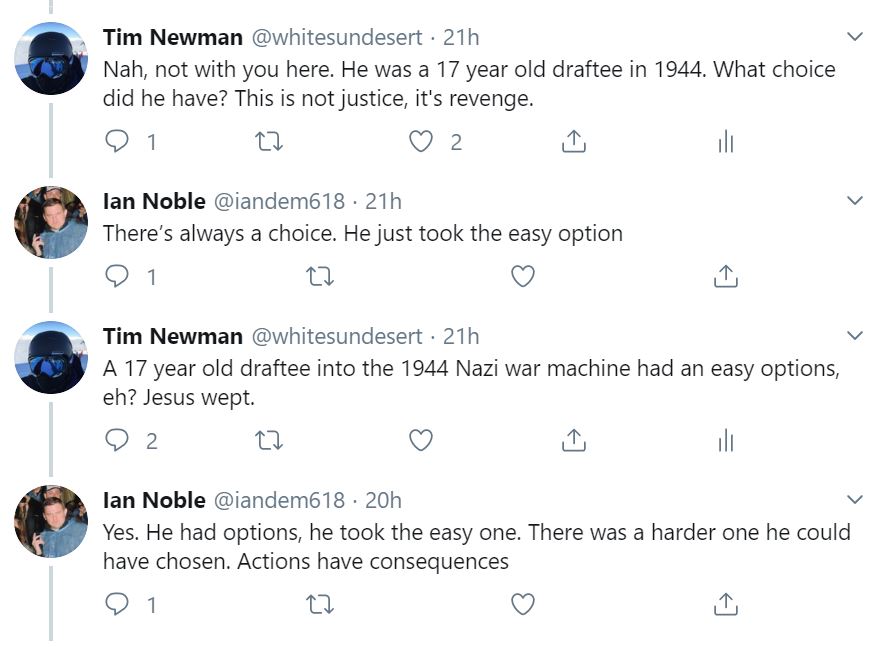 I suppose being born in the post-war era in western Europe it’s hard to imagine what it’s like living under a murderous, totalitarian regime and therefore it’s easy to kid ourselves that we’d have been the Chinese guy standing in front of the tanks at Tiananmen Square. I suspect those who lived through the Soviet Union, occupied France, or Saddam Hussein’s Iraq don’t hold themselves in such high regard, though.

I’ve written before about the appalling binary choices the Nazis forced on people, and while I’m not going to say Dey is much of a victim (especially considering those on the other side of the wire) it’s unlikely teenage draftees into the Wehrmacht had a whole lot of say about their career paths. There are claims that guards didn’t have to serve at concentration camps and could request a transfer. Even supposing this is true, transfer to where? Stalingrad? Or perhaps it was true in theory, just as the Soviet constitution guaranteed a fair trial. This chap on Twitter presumably thinks Dey should have disobeyed orders and been shot instead, but what if he had others to think about, such as a family who might face repercussions? For all the fear of non-existent Nazis in contemporary society people seem to have forgotten how the real Nazis operated and how much the Gestapo was feared by the population. In my 19 years of corporate life I’ve barely met anyone brave enough to disagree with their boss, yet we’re supposed to believe our generation would face down a Nazi officer in 1944? Please.

Thinking about this last night, what Germany is doing by prosecuting this man is signalling to everyone they take Nazis and the Holocaust seriously in order to deflect attention from the fact that anti-Israeli sentiment runs strong across German politics and, largely thanks to Merkel’s immigration policies, antisemitism is on the rise. The decision to prosecute is therefore political, as is the hounding of British troops who served in Northern Ireland in the 1970s. You’ll note that the politicians who sent them there and the senior officers who commanded them aren’t being hauled into courtrooms 45 years after the events in question, it’s just the squaddies, NCOs, and junior officers who are having their lives ruined at the hands of treacherous lawyers and spineless politicians. Those really responsible are either dead or off-limits, which is why these prosecutions are happening only now.

The irony is this Ian Noble chap is an ex-soldier who served in Kosovo. He says he went there to prevent genocide and maybe he did, but he was there without a UN mandate and many Serbs (and probably a lot of Russians) would have every reason to think he was an accessory to war crimes. Bear in mind he was sent there by Tony Blair, a man who ordered Britain into an unsanctioned attack on Iraq, and if by some strange turn of events Russia ends up wielding clout on the international stage in 40 years time he might find himself yanked from his retirement home and asked to explain why he was murdering innocent Serbs. And he was no draftee. This chap probably doesn’t think it’s possible and nor do I, but I wouldn’t want to bet on some future British government not seeking to burnish its progressive credentials by punishing soldiers who took part in the Iraq War – or maybe even the Kosovo War – once the people responsible are safely dead. Who knows what form the British government will take in another generation? We already have an overt IRA sympathiser as leader of the opposition, and the demographics don’t look good if it’s favourable views of the Iraq War we’re after.

The fact that every German who served in the Wehrmacht wasn’t a genocidal Nazi was well-understood at the time, even by those who fought them. My Austrian friend from my MBA has grandparents who fought in the German army because – surprise surprise! – that’s what Austrian men of that age were forced to do. There’s a good chance they might have done some pretty unpleasant stuff while in the uniform too, because that’s what happens when men go to war across an entire continent. Their contemporaries on the winning side hanged the leadership then moved on, and never sought to punish the rank and file. But the ever-so-clever modern generation who weren’t there and have never seen their country attacked let alone occupied by a foreign army know better. In the same vein they’ve convinced themselves that every American who fought for the South was a racist who hated black people and took up arms only to prolong slavery, while those who fought on the Union side could be assistant editors at The Huffington Post. And somehow they think Abraham Lincoln fought the war to free the slaves. Unfortunately there are no ex-Confederates left for liberals to put in jail so they have to be content with tearing down their statues instead.

It’s hard to know what’s worse, the ignorance, the revisionism, or the opportunism. Whatever it is, it has nothing to do with justice.

49 thoughts on “The crimes they are a-changin’”