A few years back I met a chap who worked for Kimberly-Clark, the giant American manufacturer of paper-based products which owns the Kleenex, Andrex, and Huggies brands among others. One of the most astonishing things he told me was that, in 2012, they stopped selling Huggies nappies in Europe:

Kimberly-Clark is to stop making and selling Huggies nappies in Europe, except for Italy.

The company has decided to concentrate on non-fastening nappies such as pull-ups and will continue to make Huggies-branded wipes and Little Swimmers.

My friend told me it was because they’d got the business model all wrong and couldn’t compete against own-brand supermarket nappies. I raised an eyebrow and asked how Proctor & Gamble manage to sell so many Pampers nappies. He looked a little sheepish and said yeah, they really got the business model wrong and ended up with mills which couldn’t turn a profit. To me, this is the equivalent of PepsiCo deciding it’s all a bit too difficult to sell cola in Europe and ceding the entire market to Coca Cola. My friends with children lamented the fact they could no longer buy Huggies and were either stuck with Pampers (which in the absence of Huggies meant they could charge what they liked), or unknown brands of dubious quality.

I thought whoever in Kimberly-Clark was responsible for a failure of this magnitude would have been hung, drawn, and quartered in the board room and his body parts sent on a tour of their global offices. However, I don’t know what happened to those responsible and apparently nobody in the company likes talking about it. Speaking with my friend, who worked in marketing, I gathered Kimberly-Clark is one of those companies where lots of highly-educated people sit in plush offices having conference calls with one another and sharing PowerPoint presentations which show they’re losing money and so a mill in Bulgaria will have to be closed. There appeared to be at least two layers of management too many with key positions filled because “they had to find a position for him/her” or because it was good for someone’s international career to keep a particular seat warm for a while. My friend was senior, smart, experienced, and capable but spent half the time making presentations for his boss and then implementing a series of minor, pedantic changes to each slide. The other half  seemed to be spent on conference calls until midnight with colleagues in the same time zone.

I was therefore unsurprised when this news was announced last January:

Kleenex and Huggies maker Kimberly-Clark Corp said on Tuesday it expects to eliminate 5,000-5,500 jobs, or 12-13 percent of its workforce, as part of its global restructuring program.

The company said it expects to close or sell about ten manufacturing facilities and would exit or divest some lower-margin businesses.

Now I don’t know how many people in plush offices lost their jobs as a result of this – I understand a few were earmarked for redundancy – but it’s funny how companies announcing restructuring only refer to the factories that will close, not the armies of highly-paid paper-shufflers they have clogging up whole towers in major capital cities. Without wanting to go all Karl Marx on you, if I were a maintenance technician facing redundancy from a Kimberly-Clark mill I’d be rather expecting the senior management to be fired en masse given it’s they who drew hefty salaries while presiding over this mess. Alas, accountability is a word which disappeared from the lexicon of modern management quite some time ago.

Anyway, today for a wholly unrelated reason I stumbled across Kimberly-Clark’s business leadership page which has this graphic:

Does this look like an organisation which has its priorities straight? Hey, we’re having to close ten factories and lay off 13% of our workforce, but at least we have 46% minorities on our board and 34% of management positions held by women! Think of the positives here, people!

According to Wikipedia, Kimberly-Clark is a company founded 146 years ago by men who looked like this: 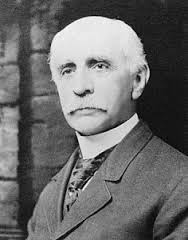 How long do you reckon it has left under its current management?