I’ve remarked before in the comments on other people’s blogs that one of the factors driving up the costs of British housing (although admittedly not the main one) is the British insistence of living in an independent dwelling, i.e. a house rather than a flat. More often than not, they also insist on having a “garden” which looks less like this: 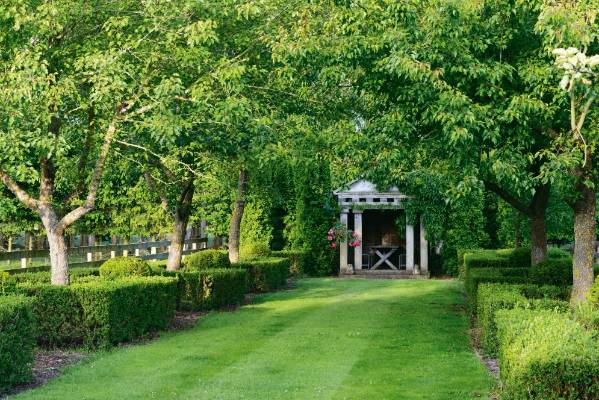 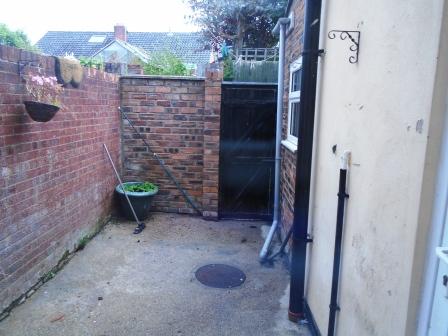 For some reason, many Brits find the idea of living in high-density housing, i.e. blocks of flats abhorrent and would prefer to pay through the nose for a tiny, damp, decrepit house with half the available footprint rendered useless for living than a warm, comfortable, modern flat. This might be reasonable if you live in the countryside or in a small town, but Brits insist on living in a house even in London. This is why, when you take a train out of any large British city, you pass behind rows and rows of awful terraced housing. Take a train out of any European city and you don’t see individual houses until you’re near the outskirts.

I’ve just spent almost five years living in a suburb of Paris, a five minute walk from the metro station, in a building similar to these, which are typical: 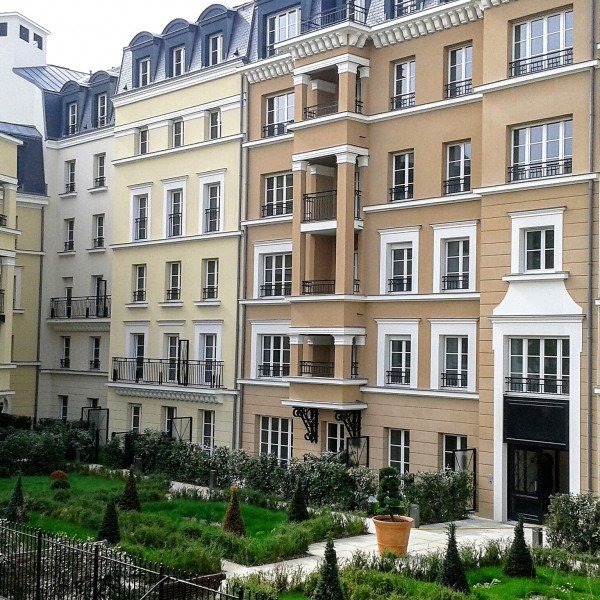 My building was 8 storeys tall, each containing a 1-bed, a 2-bed, and a 3-bed flat. There were 3 buildings in all, so around 75 flats, all sharing communal parking, lifts, entrances, etc. The place I’ve moved to is broadly the same, only 4 buildings and about 150 flats. These are quite new and well built with proper concrete walls and floors; if I lived closer to the centre of Paris, I’d have been in an old building with paper-thin walls, but the communal living concept would have been the same. Some even share a heating and hot water system, but that’s much rarer now with new flats having an individual, fully-electric system (hurrah for cheap nuclear power!). Everyone pays a communal charge based on the surface area of each flat, and that goes towards running costs and maintenance, organised and managed by professional companies who exist for this purpose. I’ve heard of people having problems, but in general it runs quite well. This is how people live in French cities, and many raise families in apartment buildings even if many move further out and buy a house.

If you mention apartment blocks to Brits, though, they think of this: 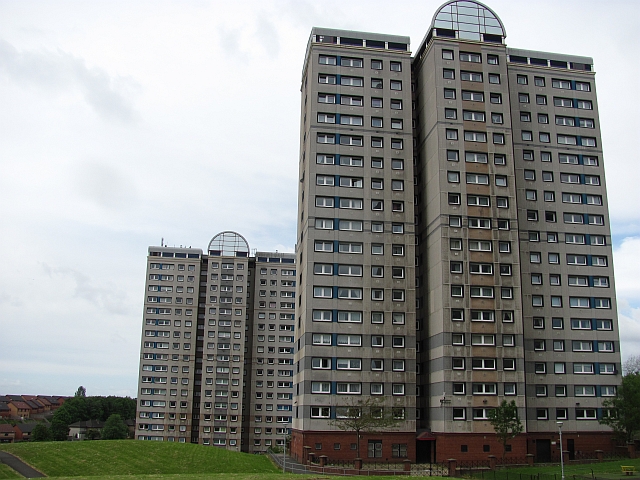 Unfortunately, these have a terrible reputation because they were primarily used for social housing and stuffed full of people who nobody in their right mind would want as neighbours. And I think that’s the problem: Brits don’t make good neighbours. The British papers are full of stories about neighbours engaged in decade-long feuds, some of which turn violent, over the height of a hedge or the placement of a fence. In all instances the bottom line is, “This  is mine and I’ll do whatever the hell I want!” Whenever I had problems with noisy or anti-social neighbours in Britain, the reaction to any complaint was “It’s my house, I have the right to do whatever I want.” Sealed off in their own small houses, Brits don’t feel the need to consider anyone else. Little wonder moving them en masse to high-density tower blocks didn’t work out, then.

Contrast this with a note I found stuck on the lift in my Paris apartment building last week: 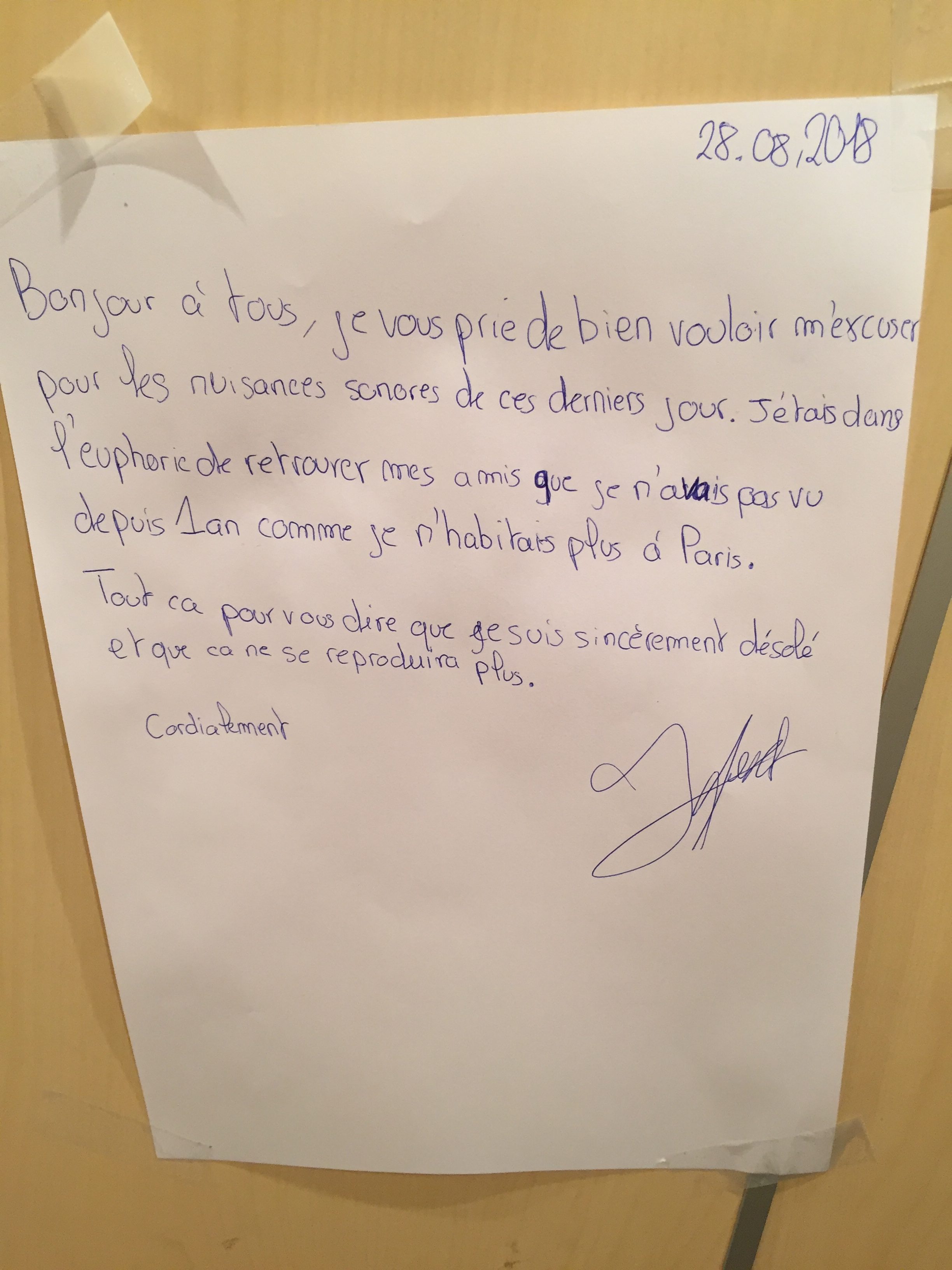 It reads: “Hello everyone, I beg your forgiveness for the noise over the past few days. I was extremely happy to see my friends who no longer live in Paris, and whom I hadn’t seen in over a year. All this is to tell you I am sincerely sorry, and it won’t happen again.”

I am reasonably sure this wasn’t posted after a complaint, too; they put it up having realised they were probably making a racket and in the interests of maintaining good relations with their neighbours (and the body that runs the building). Can you imagine this being posted in the lift of a British apartment block? No, nor me.

Later, someone wrote an addendum: 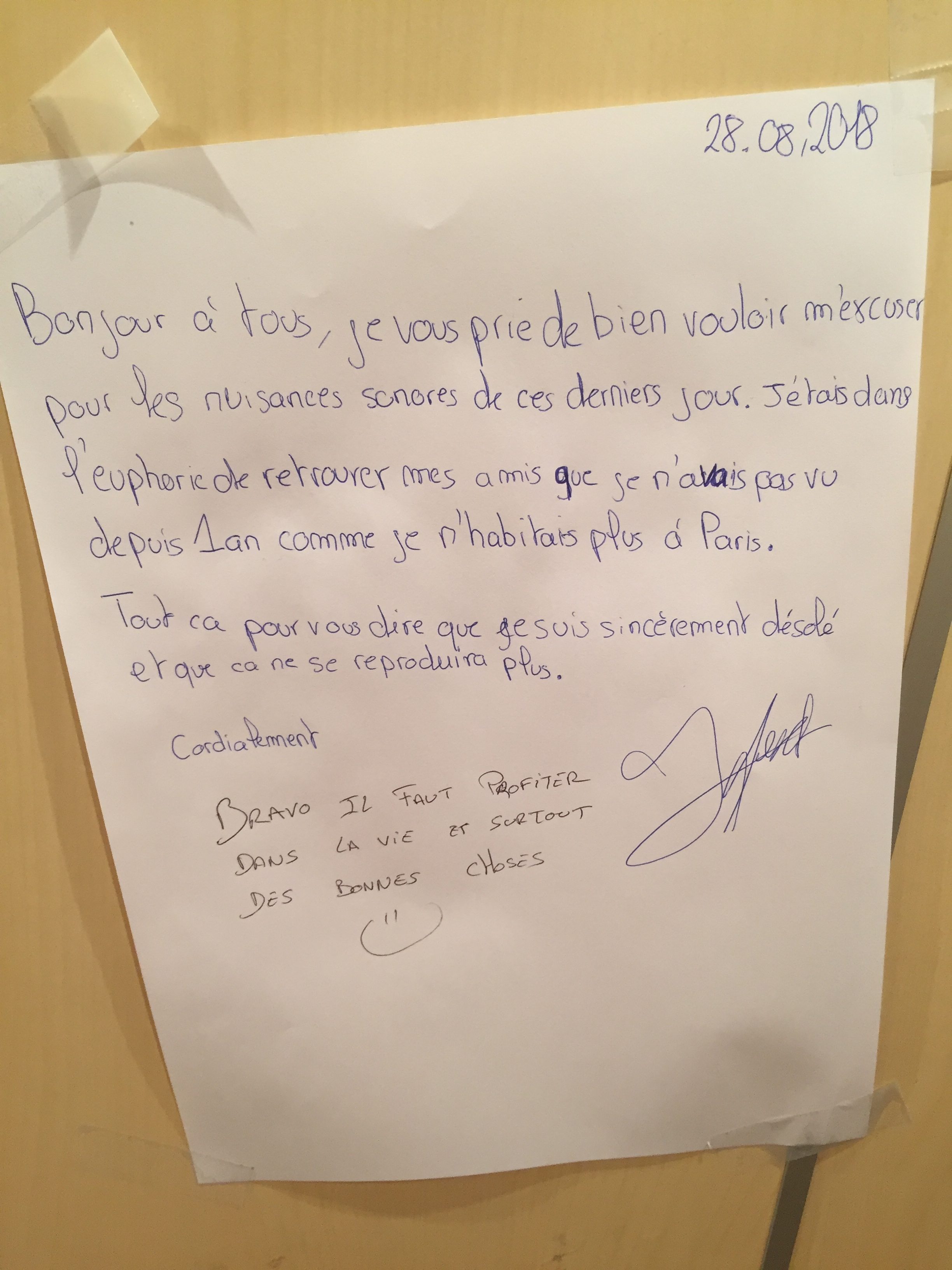 “Well done, one must enjoy life and especially the good things.”

In many cases, the problem of housing in Britain is not so much the type of accommodation but the mentality and quality of the tenants.

54 thoughts on “Apartments in Britain and France”