When I arrived in Paris in early 2014 I was sent on a training course entitled “Living and Working in France”. It was run by a French lady who’d worked for Michelin and been sent on expatriation to the US for several years. When she returned she realised how peculiar the French way of life must look to foreigners, so quit her job and set up this course, which was excellent. The course took two days, morning and afternoon, so four sessions in all. The first day was about life in France, the second covered the work environment. On that second day an entire morning – a quarter of the whole course – was dedicated to a single topic: meetings in a French company.

When she introduced this topic, the instructor laughed and said this is one of the things which baffles and infuriates most foreigners working in France so she had to give it plenty of attention in her course. Having spent almost five years sitting in meetings in France I can say she was absolutely correct, but the training only allows you to understand what is going on and why, which does little to ease the frustration. I was about to describe meetings in France in a blog post but realised I couldn’t do so without first describing what passes for a presentation in a large French company. Now aspects of this will certainly be found elsewhere, particularly in large, bureaucratic organisations, but parts of it will be uniquely French with the combination being quite horrific. So here goes.

The best people for giving presentations by far are Americans who’ve practiced it. They’ll stand at the front of a room with a slide showing a picture and they’ll kick things off by talking about why that picture is relevant. That gets your attention. A Frenchman will kick things off with an agenda he has no intention of sticking to. The American will then proceed to the next slide which has a maximum of three pieces of information in concise form, a picture or cartoon, and plenty of white space. He will then leave that slide on the screen as a focal point while he talks around it for several minutes, imparting the information you’ve come to receive. A Frenchman, on the other hand, will present a slide like this: 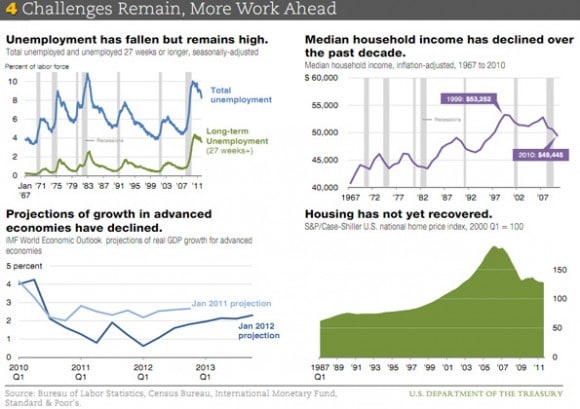 He will then read out what is on the slide, word for word if it’s a series of bullet points. Whereas the American uses his slides as a presentation aid, with the bulk of the information delivered verbally, the French think all information to be imparted must appear on the slide. It is common when preparing slides for a French manager for him to say “You forgot to mention it rains in Argentina”. If you say, “No, I’m going to say that in the presentation” you’ll be instructed to include it in the slide.

As such, when an American gives a presentation, he’s going at a rate of around one slide every four or five minutes on average, and each slide is light in content. When I’m asked to give a presentation I ask how long it is and aim for around one slide for every four minutes, with a couple spare at the back if I need to expand on something. The French, bless ’em, don’t appear to think there is any link between the number of slides and the allocated time, hence don’t use this as a basis for preparing the presentation.

Instead, they just put in as many slides as necessary to deliver the information they believe their hierarchy wants to see (French presentations are delivered solely to satisfy anyone in the room more senior than the presenter; anyone else might as well not be there). As such, it is not uncommon to see what is supposed to be a two-hour presentation contain eighty or ninety slides, each crammed full of text in size 8 font with almost no white space and graphs spilling over the margins. Nobody – not even the geniuses who finished top of the class in a polytechnique – seems to understand that a slide every 45 seconds for two hours is laughably impossible, and human beings can’t consume visual information at that rate. They get around the first problem by letting the presentation overrun by a ludicrous degree: I’ve seen hour long meetings go an hour and a half over time. The second problem doesn’t actually matter, and I’ll explain why.

A presentation in France is essentially a report using PowerPoint instead of MS-Word. I noticed some time ago certain managers don’t like reading block text. I suspect they believe it’s beneath them; rather than read a report and provide comments, they feel a lot more important ordering someone to stand in front of them and explain things in person. I once had a facility manager tell me he “didn’t have time” to read my project execution plan explaining what changes were about to be made on his asset, and instead I should make a trip of several days to give him a presentation. The implication was that four days or my time was worth less than half an hour of his, but I suspect he was just lazy.

The other reason some managers prefer presentations to reports is the same reason they prefer management-by-committee to individual decision-making: it allows them to evade responsibility. If someone writes a report and sends it up through the hierarchy, the managers have some sort of obligation to act on it, and they can’t claim ignorance. This is especially true if, as is the case most of the time, one of them has to sign it before it’s issued. Far better to have a presentation where lots of people are present, nobody really knows who said what, and every decision can be passed off as a collective effort or denied outright. Taken to its extreme, even technical work – calculations, designs, etc. – is not validated using an inter-discipline check endorsed with signatures, but by sticking the whole lot in PowerPoint and presenting it to a bunch of people who try to spot any errors. This actually happens. Several times in my recent career I asked for some technical data or a design and was handed a PowerPoint presentation. This is why it’s important all the information is contained in the slides themselves, and nothing left to be imparted only verbally: a presentation in France is often the method by which work is endorsed by the hierarchy, as opposed to signing off on a document. Unlike elsewhere, it’s not actually a method of sharing information in the sense normal people would understand the term, hence it doesn’t matter that it’s ineffective.

In summary, the reason presentations in French companies differ so wildly from those found anywhere else is because they serve a totally different purpose. For the uninitiated, I’ll leave it to you to imagine what it’s like sitting through one of these things on a warm afternoon.

28 thoughts on “Presentations in France”