A few months ago I blogged about the travails of Kate Mulvey, a 50 year old woman who believed her 2:1 in Italian from the University of Kent intimidated men. Well, she’s  back:

A couple of years ago, I too joined an expensive matchmaking agency. I had just come out of a seven year relationship, and was on the wrong side of 50.

Ah yes, this was the seven year relationship during which you never got so much as engaged.

I soon tired of online dating and receiving messages from over weight baldies who peppered their emails with childish emojis.

Readers may recall this is how Miss Mulvey looked when she was 31: 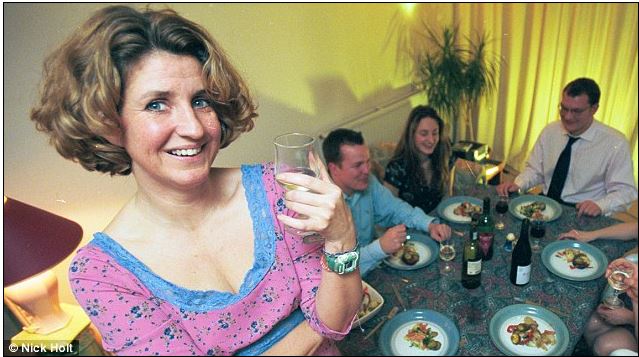 Fast forward two decades and she’s disparaging men for being overweight and bald. I wonder what they thought of her?

I hankered to find Mr Right-for-me, a man who was suitably educated and a successful professional.

Like a 2:1 from the University of Kent? Now these fat, bald men she’s meeting might litter their emails with childish emojis, but Mulvey’s approach to dating is scarcely more mature.

And so this is how I found myself, throwing money (my entire savings to be precise) to an upmarket matchmaking agency in central London. The agency claimed to filter out the undesirables, the mediocre and give clients the personal touch, so I handed over the hefty sum of £6,000.

Hang on a minute. Your entire shtick is you’re a successful, educated single woman who’s over 50, yet your entire savings were a mere £6,000? And what the hell were you thinking in handing over this sort of cash to a dating agency? Does this sound like a suitable life partner for any man, let alone a smart, successful one?

As I waited to be matched with someone from their ‘extensive database’, I idly imagined my handsome date, cashmere polo neck, a bit academic and kind. We’d eat steak tartare and swap notes on our latest clever box-set find and favourite novels.

What’s in it for him?

How could I have got it so wrong?

Because you have an unreasonably high opinion of yourself, unrealistic expectations, and you appear not to learn from mistakes.

The reality was an array of terrible matches, a growing sense of alarm and a flaming row in a flash restaurant in Chelsea.

Did he ask to split the bill, but you’d spent all your cash just getting to this point?

The first indication that all was not as I had expected came when I met personal matchmaker at a Park Lane hotel for ‘tea and an interview’.

Personal matchmaker? That sounds like something I might be good at. I’d direct Mulvey to the nearest pet shop which offers bulk discounts on cats.

“So, are you a psychologist?” I asked, eager to press her on her method of assessment.

“Oooh no, I’m just a people person. I love people,” she trilled.

I told her how I loved folk music, my favourite film was The Deer Hunter, and enjoyed weekends in the countryside. So far so banal.

Women seem to think sharing a hobby or having similar opinions about books or films is the key to meeting the right man. Did she say anything which might indicate her character, in the manner her Telegraph article does? Or did she wisely keep that hidden? If I were doing the job of the matchmaker, I’d start by asking who she last dated and what went wrong.

A few days later she emailed me with the details of W, “a successful entrepeneur who had travelled extensively and also liked folk music”.

Could this woman get any more shallow? This obsession with “travel”, as if that makes you more cultured.

When I met him at a pub in Richmond, I was shocked. I was expecting a cultured and dynamic man, instead I got a man in a pair of jeans, a moth eaten jumper and the table manners of a modern day Baldrick.

Why would you expect someone cultured and dynamic? Because he’s well-travelled? And can we get his view on expectations versus reality?

And therein lies the rub. These agencies trade on their exclusivity, yet the men I met were far from the international super elite they promised.

Why would the international super elite be on dating sites? That the whole thing was a con ought to be obvious to anyone with half a brain; didn’t the Ashley Madison leak show there were virtually no women on the site, and those that were were hookers?

And the so called experts were a group of ex pr girls with swishy hair and ability to write up a nifty ‘press release’.

And the ability to persuade gullible fools to part with what amounts to their entire savings.

It wasn’t too much of a surprise then that they rarely got it right. For the next few months, I dated up and down the eligibility scale. Some men were pleasant but dull, others who said they wanted to be in a relationship but were burdened with so much baggage they were toxic.

So you’re over 50, spending thousands on a dating site, but you rule out anyone who’s pleasant but dull and anyone with baggage. Well, good luck with that. Remember, this is the woman who thinks men find her intelligence intimidating.

There was the 65 year-old American with a stunning property portfolio who broke the rules and googled me, only to inform me that I was too old for him.

Heh! By how many decades?

The funny looking barrister, who invited me to his St James’s club, and turned out to be prickly and aggressive

A minute ago you were complaining they were pleasant but dull.

I was about to call it a day and demand my money back, when my matchmaker sent through the detail a publisher from Oxford. We met at a pub near his home.

But very quickly the debonair man who had seemed laid-back in London had morphed into a raging chauvinist in the countryside. When I started to chat to waiter in Italian, it became clear that my date was not happy. He muttered something under his breath and rolled his eyes like a stroppy teenager.

“I WAS WONDERING when you were going to let me join your conversation,” he boomed. I tried to laugh it off but clocked this was a man with a fragile ego.

Okay, if you’re going to recycle old stories at least try to maintain consistency. According to her earlier article, this happened in Italy not the Cotswolds, and it was with a guy she’d been with a year. I suspect this whole thing is unalloyed fabrication.

It is a tough time for midlife dating today, and there are a lot vulnerable educated women like me who are so desperate for love they are willing to try anything whatever the price.

Except be with a pleasant but dull man, or refrain from having conversations with other people in a language your date doesn’t know.

Yet, the quality of men were, I no different to those on online dating sites.

And the quality of women is just stellar, I suppose?

I learnt the hard way, but my advice when it comes to dating is: trust your instinct and meet through friends of friends.

Firstly, I suspect her friends are few indeed. Secondly, I’d bet her acquaintances learned not to introduce her to anyone the hard way a long time ago.

45 thoughts on “Round and round the Mulvey bush”