I find this interesting: 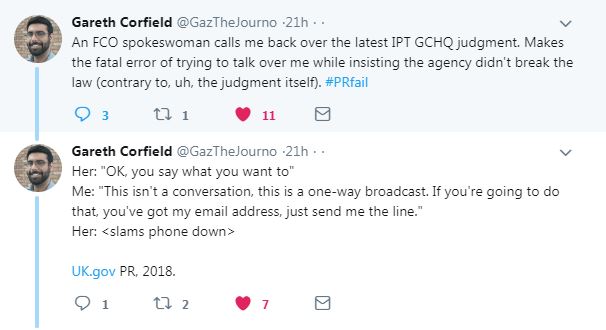 It’s tempting to say this happens because an outfit like the FCO doesn’t care what the public think and its spokespeople believe they’re under no obligation to hand out information, but it goes a bit deeper than that.

The FCO is a large, bureaucratic organisation and one needs to understand how appointments are made in outfits like this. In a normal, functioning company people are put into positions which they are interested in and also suit their skills, competencies, experience, and personality. In Sakhalin around 2005 an American company won a large project to build an onshore installation, and needed to mobilise an entire site team made up of both locals and foreigners. I knew somebody who was recruited to work in the document control department, and she told me what happened. The American company called on an employee of theirs who was in his fifties and all he’d done his entire career was set up and run document control departments. He arrived in Sakhalin and immediately said “okay, we need this, that, two of them, four of them, and that goes there and this goes here.” He set up the department, trained up a bunch of locals, ran it for six months, then went back to the US to do the same thing on another project. This is what he did for a living, and he did it brilliantly.

Later on in my career I found myself watching someone in a large oil company trying to do the same thing, i.e. set up a document control system. The problem was he’d never done it before, and didn’t really know anything about document control. His approach was to brainstorm the subject as if he was stranded on Mars with only a small pocket watch, a tub of vaseline, a length of garden hose and 6 hours of air remaining. “Why don’t we try this? What if we did that?” he’d ask, as if there weren’t four decades worth of industry experience and best practices to answer his questions.

At some point I worked out that in large, bureaucratic organisations people are assigned to positions only temporarily, and irrespective of whether they are suited to them. A position doesn’t so much represent a job which needs doing as a mere step in a career path which must be completed. Whether the job actually gets done is largely immaterial provided the person holding the post doesn’t embarrass the hierarchy in any way and remains obedient and on-message. Regarding the guy who knew nothing about document control, someone had decided this was a good position for what passed for his career and simply assigned him to it. It didn’t matter to them or him he had no idea what he was doing, what was important is he occupied the position for the required duration. He might as well have been put in charge of offshore maintenance, and indeed for all I know that’s what he did next. In large, modern organisations both people and positions are wholly interchangeable.

This is why the FCO spokeswoman doesn’t know how to do a spokesperson’s job. My guess is she was plonked in that position for 2-3 years as part of a slow but steady climb up the ranks of the organisation and her brief is not to make any waves but to do exactly what her management tells her; short of swearing down the phone, how she manages the public is up to her. It is an absolute certainty she’s not working that job thanks to an aptitude for personal relations or experience in the same, and you can be equally sure a spokesperson for Tesco has both in spades.

9 thoughts on “Filling a Position”