I confess, until it ran into financial difficulties and made the news last week, I’d never heard of Carillion, the company the British government seems to have outsourced a lot of stuff to. According to the BBC:

And this graphic shows us what they actually did: 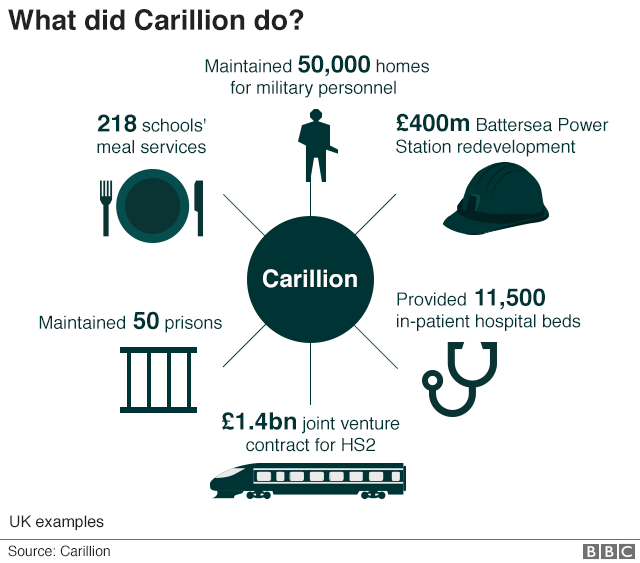 To me, this looks like a catch-all company that has bedded itself in with the government and helpfully told politicians and civil servants that they can take care of everything. No problem, just leave it to us, just keep that cash hose turned on full.

Having emerged from a company specialising in civil construction, Carillion appears to have branched out somewhat. I don’t know how much synergy there is between providing hospital beds and building a high-speed railway line, but they look like an outfit which has lost focus of its core business, probably wooed into other areas by guaranteed government revenues.

To many, governments subcontracting services like prison maintenance and school catering might seem like a good idea and on paper it probably is. But when mass-subcontracting like this you need to be careful you’re not just replicating the problems of government-run bodies further down the contracting chain.

A company like this will be well-connected politically, which means they likely hired a lot of former civil servants and had the mobile numbers of plenty still serving. If you’re a company dependent on sucking up to politicians and civil servants while offering a sprawling array of services on high-profile and highly-politicised projects, chances are you’re a lot better at politics than you are business. Over time, I expect the upper and middle management got a lot better at telling government representatives what they wanted to hear and a lot worse at delivering core services, which would have been increasingly subcontracted to specialist companies to the point Carillion might not even own a single cement mixer.

This is pure speculation of course, but readers of my blog are used to that and I’m just running with what I’ve observed in modern corporations, especially those involved with governments. A post-mortem of Carillion might show a company stuffed full of very modern managers who excel in telling their superiors and clients exactly what they want to hear, a pattern which extends right up to the CEO. Most will spend their time in meetings discussing figures and schedules which are wholly fantastic, in a culture where career progression is based on how “on message” you’ve been thus far in your tenure in relation to the nearest manager’s latest whim. Experienced hands will have retired taking their knowledge with them, replaced by bright young things who’ve been told to get with the programme or else from day one. Power-skirts will have arrived en masse, egged on by government bodies tasked with ensuring their main contractors fulfill all obligations regarding diversity, gender compliance, and office environmental practices. Everyone would have been focussed solely on the process, the outcome be damned. Anyone left over from a previous era who liked to “get shit done” would have been hounded out or shoved in a corner, his career over, for having the wrong attitude. Anything useful carried out under Carillion’s management would have been done by strong, Sun-reading, fit young men in dirty coveralls with a different company logo on the back, subcontractors each and every one. Meanwhile, Carillion’s employees would have shared spreadsheets and Powerpoint presentations in air-conditioned offices and congratulated each other on how much value they were adding.

Perhaps I’m being unfair, and I know nothing about Carillion. But from what I can tell, this is the direction a lot of large corporations are heading in, i.e. becoming bloated monstrosities engaged in process-driven guff while subcontractors do all the useful work. What was the size of Carillion’s overhead on a typical project, and how much markup did they need to apply to cover it? I’ve seen the figures for a large engineering company on a major project and their overheads – mostly useless company-men calling themselves managers – would make Diana Ross feel like she skimped on her global tours. I think we’re going to see a lot of large corporate failures in the next decade, with many surviving until then thanks only to a lifeline of legacy rents which the current management is wholly unsuited to maintain or replicate. Thanks to James Damore’s lawsuit we’ve already seen what state Google’s management is in; I expect this is typical, to some degree, of a lot of modern corporations.