Lately there has been a lot of historical revisionism surrounding the US Civil War, the latest of which is outrage over General John Kelly’s remarks that “the lack of an ability to compromise led to the Civil War”. This led to howls of outrage from people who believe the only words anyone is allowed to say on the subject are “Slavery is evil!” over and over until our brains melt, but Streetwise Professor has done us all a service by pointing out that what Kelly said was factually correct and would make sense to anyone who knew what they were talking about.

This group would probably not include the author of this thread which I came across this morning on Twitter: 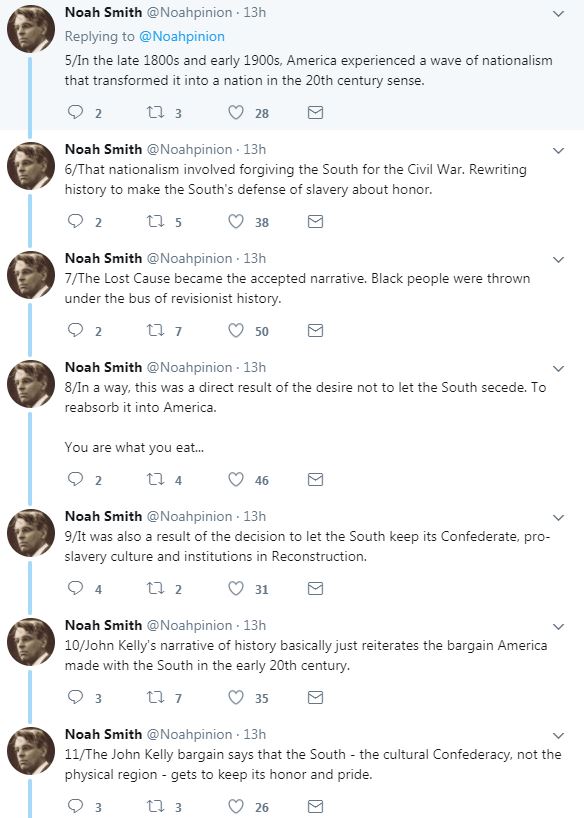 Now I understand that a lot of the pro-Confederate views in the South were a reaction to the Civil Rights movement, but that notwithstanding, what is this chap on about? “Black people were thrown under the bus of revisionist history?” Were they? How? By whom?

And the South was allowed to keep it’s “pro-slavery culture and institutions”? Well, other than having their institutions as well as homes and property utterly destroyed by the Union forces and slavery being abolished along with the economic system the South relied on, presumably.

What he means, of course, is Southerners were permitted to live and express their opinions rather than being forced to adhere to the narrative of the victors. Actually no, scratch that: he means they weren’t forced to adhere to the narrative of modern-day SJWs bent on historical revisionism a century-and-a-half later. I don’t know a lot about the Reconstruction of the South, but I understand it was a period of considerable hardship and humiliation for those involved. One doesn’t need to sympathise with the South to point out this is hardly compatible with a cosy compromise which allowed them to carry on as before, as this chap implies.

Even assuming this compromise is what Kelly was talking about – and it wasn’t – what were the options open to the US at the time? They fought a horrific war to prevent the Confederate states seceding, and somehow had to reincorporate them and the population back under the Federal umbrella. Other than mass murder or repressions along Soviet lines, what choice did they have other than to reach a compromise? The only people who have had that demanded of them were the Germans after Nazism, and look how that’s turned out: seventy years they’re so lacking in confidence they’ve voted to replace their own population. Even the Japanese weren’t required to hang their heads in shame in perpetuity, and nor have they paid much more than lip service (and financial reparations) for what they did in Manchuria and Korea before and during WWII. What this man is demanding is the descendants of everyone who fought for the South to grovel at the feet of the Permanently Aggrieved to atone for holding the wrong opinions about events long in the past which few seem interested in understanding any more.

Pa Smith has been telling Sonny Boy that their family is so woke they knew slavery in the US was wrong and would have fought against it, even though they were living in Lithuania at the time. That any Lithuanian migrant drafted into either army would have had the first idea what they were fighting for is laughable, let alone the suggestion that their opinions on blacks and slavery would have aligned perfectly with abolitionists – or contemporary SJWs.

What’s more worrying is idiots like this believe it is they who have the solution to the widening rifts in US culture, whereas they are more likely to send the US headlong into serious civil conflict.