There’s been some noise on social media over the last few days about Gab, the alternative to Twitter where anything goes, having its domain name rescinded: 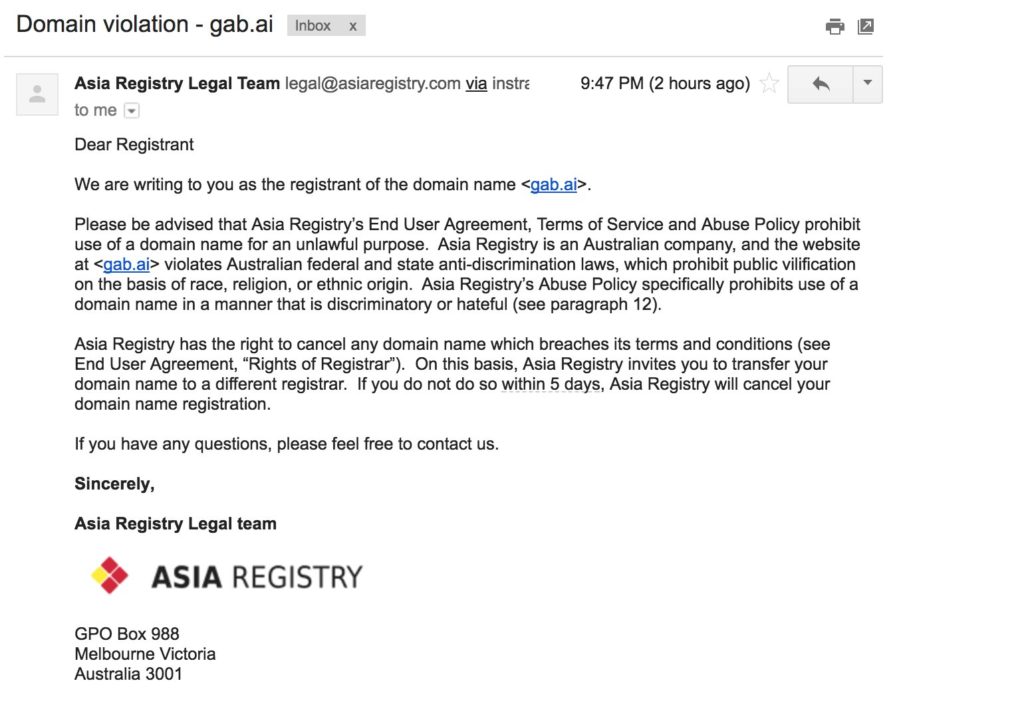 This letter came a few days after Gab announced it was going to sue Google for some reason, and skeptics are saying it may well all be a publicity stunt by the Gab founder, who I understand is notorious for attention-seeking.

Whatever the case may be, the letter supports something The ZMan has been banging on about for a while now. He argues that in order to get around laws guaranteeing free speech, governments have taken to leaning on social network providers – Facebook, Twitter, Google, etc. – to enforce “community guidelines” which purport to outlaw hate speech to protect people, but in practice are used to silence any subscriber who is saying things they don’t like. The government can then hold their hands up in all innocence and say “nothing to do with us, these are the decisions of private companies”. On the evidence I’ve seen, I find ZMan’s argument convincing.

When Twitter started banning people for having unwelcome opinions, the founders of Gab saw a gap in the market and started their own version. Both Apple and Google have refused to approve a Gab app until they can ensure nothing which constitutes discriminatory language will be posted, which defeats the whole purpose. Now it appears someone has gone after Gab’s domain registration, probably having seen other right-wing sites get their registrations pulled in the aftermath of Charlottesville.

So far it’s an effective tactic. If the tech giants and domain registrars are the gateway to 99% of communication, denying somebody access is the equivalent of banning them from speaking. I don’t buy the argument that this is purely a private matter between companies and their customers: corporations which enjoy monopoly positions and dominant market share are forever being hauled into courts on anti-trust charges, all in the name of consumer protection (and filling the coffers of cash-strapped governments). And I’d be more convinced governments were concerned about the situation were they not rubbing their hands with glee, Theresa May being the main culprit:

Technology companies must go “further and faster” in removing extremist content, Theresa May is to tell the United Nations general assembly.

The prime minister will also host a meeting with other world leaders and Facebook, Microsoft and Twitter.

She will challenge social networks and search engines to find fixes to take down terrorist material in two hours.

This meddling, useless former head-girl never passes up an opportunity to push for restrictions to the internet or powers to snoop on people’s electronic communications. She’s obsessed with it, and the sooner she’s booted from office the better. Of course, the effect of May’s lecturing is that tech companies will double-up what they’re already doing: pulling down posts and articles willy-nilly if they contain a single word which might upset this year’s designated victim class, yet the stuff calling for shooting cops, punching Nazis, and the destruction of Israel and the west stays up. And if a load of right-wing writers, bloggers, and commentators get caught up in the sweep? Well, that’s a feature, not a bug.

My guess is people will slowly start shifting their domain registrations to countries where companies can’t be leaned on so easily, namely Russia. Not that Russia is a bastion of free speech but they have the advantage of being beyond the west’s reach and quite happy to see people bashing them from its territory. They also couldn’t care less about discrimination on the basis of race, religion, etc. I don’t know what it takes to set up a .ru domain, but I’m sure enterprising Russians will spot a gap in the market if dozens of popular sites are being thrown off the internet by their domain registrars.

If you drive people away, they’ll seek shelter wherever they can find it. They will then start defending those who provide it, and refrain from criticism. Anyone who has seen their website disappear from the internet after receiving a weaselly-worded letter like the one above and sets up in Russia isn’t going to spend much time complaining about the Russian government. I know I wouldn’t. Frankly, if I got booted off here and a Russian outfit was able to host me solely because Russia was beyond the reach of what is effectively western government censorship, I wouldn’t give two hoots who they were flogging advanced weaponry to, or whose elections they supposedly rigged. If you’re silenced in your own country, you’re not going to be too fussy who you make friends with. Freedom of expression is something people take very, very personally.

Of course, should unapproved opinions start popping up on websites hosted in countries like Russia, the next step for western governments would be to force ISPs to restrict access to them. You can imagine authoritarian harridans like May rubbing her hands with glee at the prospect of that. I expect we’d then see calls to regulate ISPs like utilities, but the way we’re going we’re more likely to see people having their gas and electricity cut off for having the wrong opinions than the government allowing them to say what they like on the internet.