This is probably going to be my last post on Laurie Penny for a while because I think I’ve made my point already and this is just hammering it home. Take a look at these tweets from yesterday: 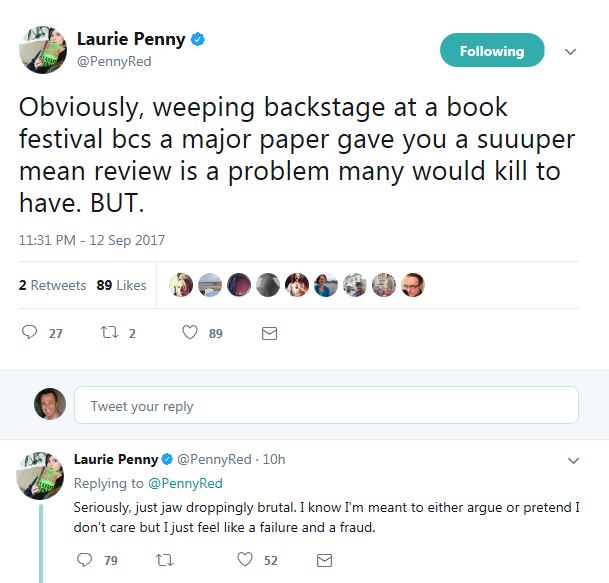 The book she is referring to is most likely her latest one, Bitch Doctrine. I haven’t been able to find the review in question, which is a shame because it would probably be a hoot.

For an avid attention-seeker who likes to get in people’s faces and make them feel uncomfortable, she appears to have rather thin skin. Crying over a bad book review? I mean nobody likes criticism and I can imagine a bad review does smart a little, but that comes with the territory – especially if you’ve set out to piss people off with your works. But it’s not the thinness of her skin that annoys me so much as the hypocrisy. Here’s Laurie reviewing Ivanka Trump’s book:

In Women Who Work,  Ivanka unequivocally depicts herself as the embodiment of everything aspirational and desirable in contemporary womanhood. The answer to any and every problem faced by a “woman who works” is simply “be more like Ivanka.” Be white, wealthy, and blonde; be rich, thin, and expensively coiffed; be late-stage kamikaze capitalist femininity made silicon-sculpted flesh. Be the Grifters’ Madonna. This is a woman who wants to sell you designer bootstraps made by foreign sweatshop workers and for you to call yourself a free bitch.

It’s true that anyone can be a dead-eyed Instagram husk of a human being frantically photoshopping themselves in the down-hours between soul-crushing corporate drudgery and unpaid emotional labour for some ungrateful lantern-jawed jock if they really want to, but it takes a special type of person to do all that whilst also being a decoy for a global backlash against women’s rights. Ivanka Trump is that special type of person, the Stepfordian Night-Ghast of neo-capitalist auto-Taylorism.

This is what the Trumps do. Like a ballistic set of spoilt toddlers having a tantrum in an upscale department store, they see something they want, they grab it, and they force themselves into it, stretching and tearing it out of shape, then they scream to be told how great they look in whatever it is while you take it to the till and pay, whether it’s the West Wing or the history of women’s liberation. Ivanka saw the trend for empowerment-flavoured pseudo-feminist punditry and wanted it, so she got her father to buy it for her, But the rest of us will be the ones to pay.

Yes, the person who wrote that is now crying and trawling the internet for sympathy because someone gave her own book a bad review.

A failure and a fraud, indeed.

11 thoughts on “A Failure and a Fraud”