I meant to include the picture below in yesterday’s post about the Australian nanny state but couldn’t find it in time. I can’t remember where I got it from, but it was taken somewhere in Sydney’s CBD, as they like to call city centres down there. 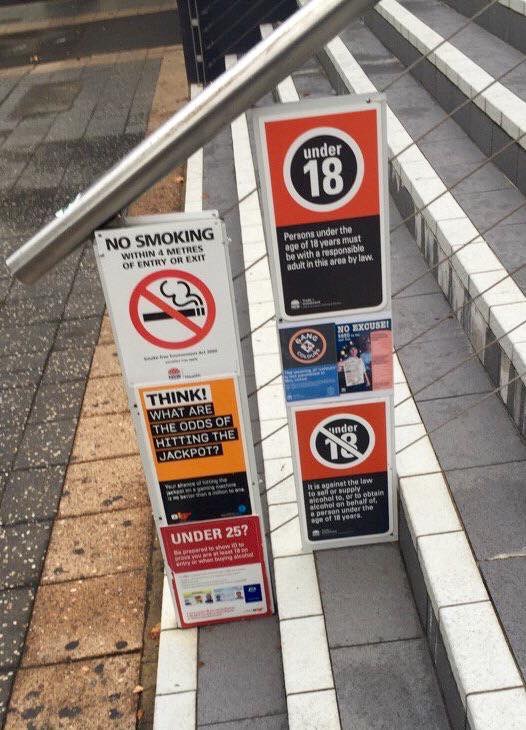 The pic is a bit fuzzy, but from what I can tell we have:

1. A sign telling people not to smoke within 4 metres of “entry or exit”. Entry or exit of what? And why 4 metres? This sounds like something a committee came up with, a committee with at least one obese member called Sharon.

2. A sign warning people of the dangers of gambling, as if they’re not known.

3. At ankle height, a sign asking if people are under 25. The drinking age in Australia is 18, the gambling age 18, and judging by the signs, the mental age 7.

5. A sign warning of gangs, and reminding everyone of the laws banning the wearing of gang colours, whatever the hell they are. I’m sure this is effective in keeping warring tribes apart.

6. A sign which appears to contradict No. 4. Are 18 year-olds allowed on the steps or not?

I show this photo to anyone who doubts that Australia has turned into a nanny-state unlike any other on Earth (although Britain is fast playing catch-up). The Australians I show it to despair: none defends it. What makes it worse is these signs do absolutely nothing to solve the alleged problems, and indeed make things worse by treating people like children who respond by behaving like it.

You do see warning signs in France but not forests of them. More importantly, if they did post such a collection you can be sure three-quarters of them would be utterly ignored and, even more importantly, nobody would show any interest in enforcing them.

10 thoughts on “More on the Australian Nanny State”