Last week I spent a few days in Baden-Baden, a German town so bath-like they say so twice. The springs there have been known since Roman times and nowadays one can visit the Friedrichsbad bathhouse, which is a classic 19th century building containing pools of various temperatures which I assume are similar to the Széchenyi baths I went to in Budapest.  Alternatively, you could do what I did and go to the much more modern Caracalla Therme complex, which is fantastic.

I’d not been to one quite like it before. What made this one different is it had dozens of jets, waterfalls, currents, bubbles, and baths which all did different things. There was a row of seats which blasted bubbles around your lower back; there were powerful underwater jets which could massage your legs, glutes, and back; there were fixed hoses which would massage your neck, shoulders and upper back, and waterfalls which would do the same thing. Somebody had obviously spent a lot of time thinking about how much water to send where and at what pressure, or how much to fall from which height, to allow you to get a proper massage without it stripping skin or killing you. There were also several jacuzzis of various temperatures, and each was set on a time-cycle: half were switched off for ten-minute intervals while the other half worked, then they swapped over. This was to stop people hogging the things all day. All you had to do was sit in something that wasn’t working and wait for it to start. There were also steam rooms, saunas, solariums, and a half-decent cafe (although the whole place was alcohol-free).

One amusing point is the upper floor is a compulsory nudist area, i.e. no bathing suits are allowed. For anyone rushing to book tickets with hopes of sharing a hot tub with a naked Maria Sharapova and two of her closest friends, I must warn that you’re more likely to be rubbing up against fat Germans the wrong side of sixty who don’t know their way around a Bic razor. I didn’t hang about in there long, but I spent three hours in the main complex one day and five the next: it was good for my bad back.

Something else I found interesting was the designers’ estimations of their clients’ intelligence. They had arranged three identical water fountains in the foyer as per the photo below: 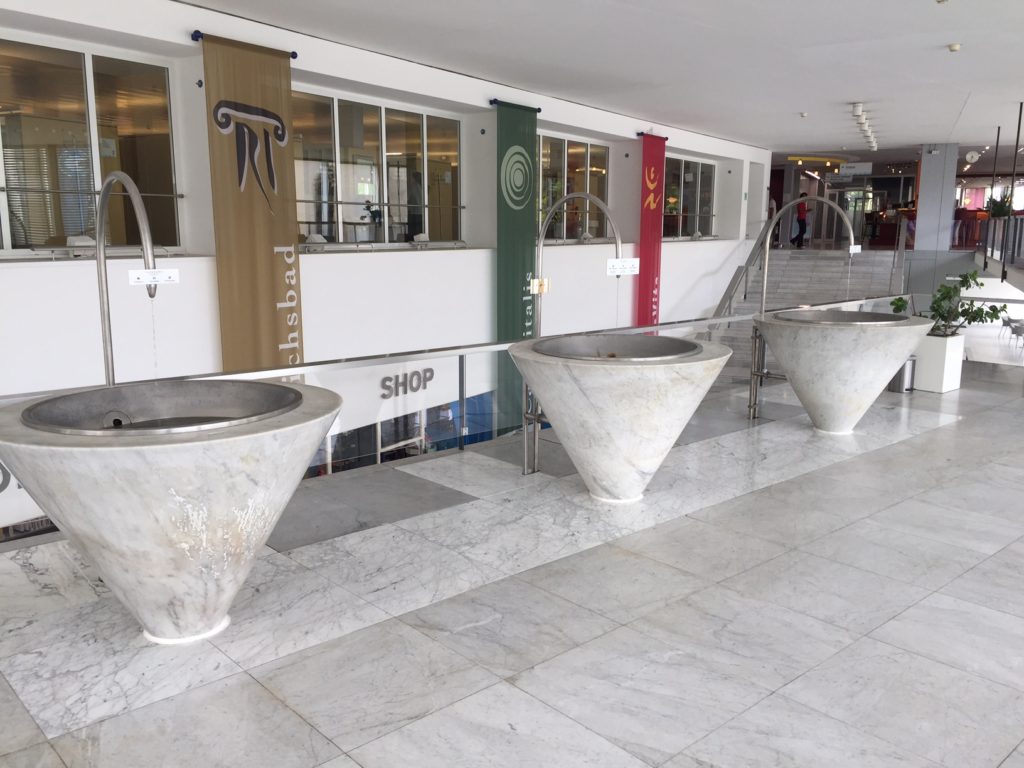 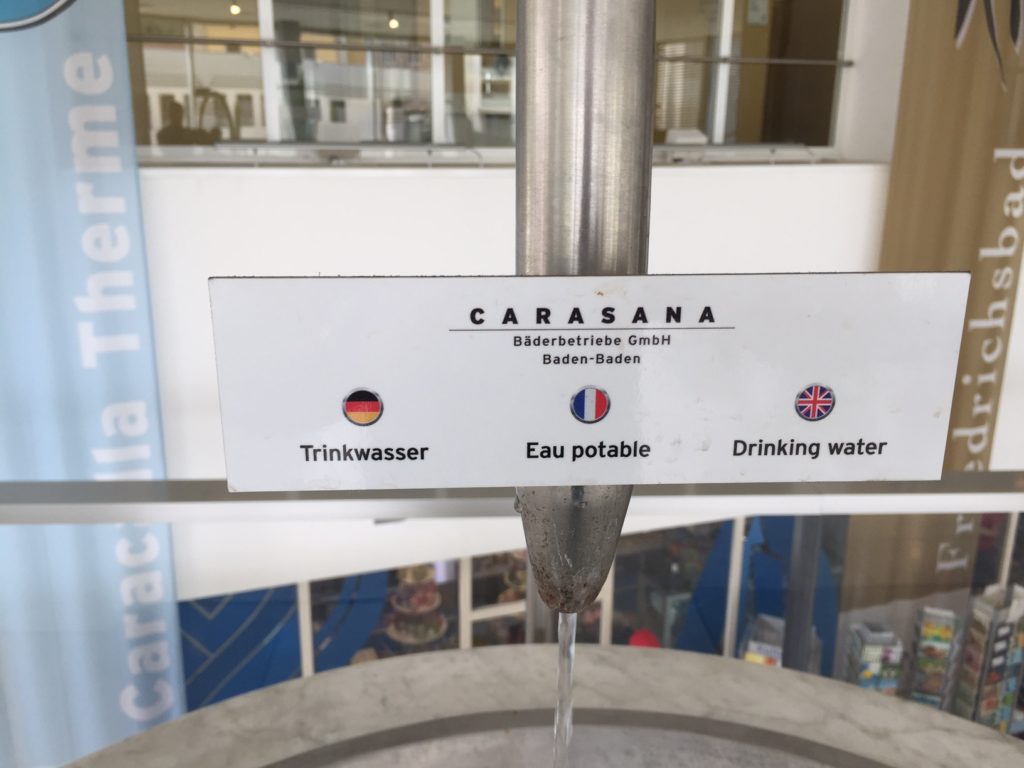 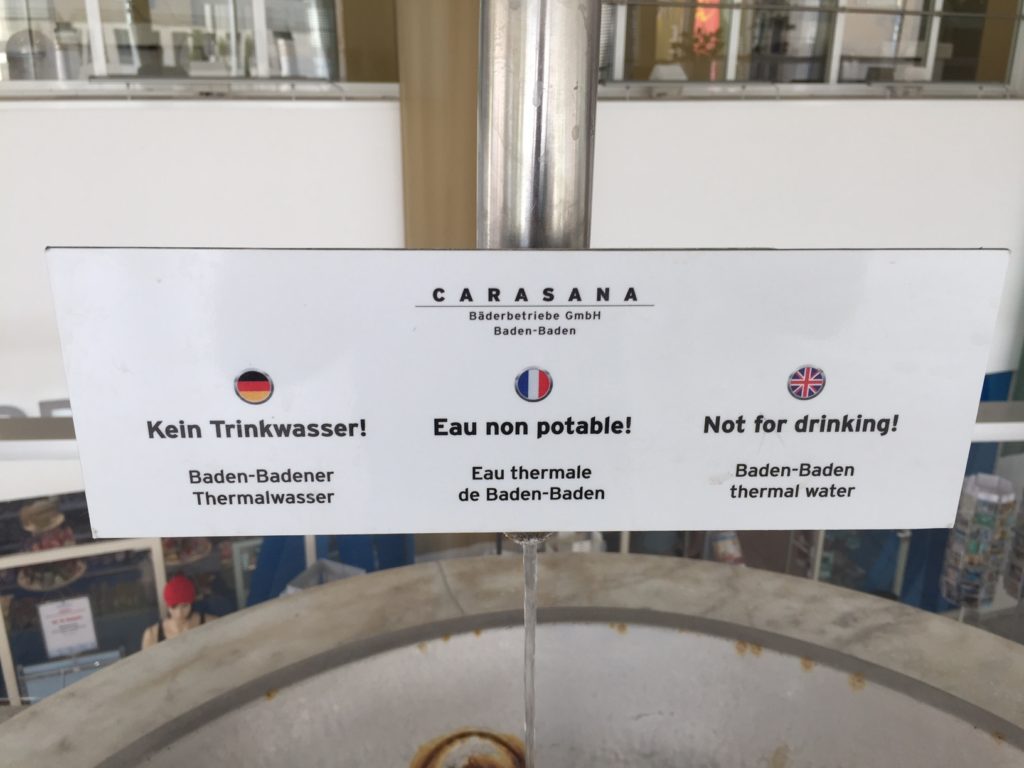 Only in Germany would somebody install three identical fountains, make Nos. 1 and 3 dispense drinking water and the one in the middle non-drinkable, and rely on people reading signs to differentiate between them. Anywhere else in the world and they’d have to put the fountains on different floors. Inevitably, somebody told me that non-Germans (meaning, Russians) often end up drinking from the middle fountain. Nevertheless, the baths are well worth a visit: clean, accessible, and very well organised.

Germany is still an odd place, though. One evening I went with my friends to buy copious quantities of alcohol from a supermarket to drink in the apartment we’d rented. We arrived at about 9:45pm and the place closed at 10pm. For some reason I faffed about and by the time I got to the checkout it was 9:55pm and there was a large queue in front of me. For reasons known only to the people running the place, there was only one checkout working and three supermarket staff watching. As I moved along, the Germans in front of me started pointing to the bottle I’d placed on the conveyor belt and saying things like “Nein! Nein!” I couldn’t work it out until I saw the woman on the till frantically shoving the bottles of the customers in front over the scanner. Apparently once the clock on the till passes 10pm it’s not possible to buy alcohol. By the time my turn came it was about 10:02 and the bottle wouldn’t scan. The woman harangued me in German for a full minute, which I utterly ignored as if she were talking to somebody else about her dog: there was no point in arguing and I wasn’t interested in her explanations. I got the last laugh though: my bill came to €10.01 and I handed her a €20 note. She asked me if I had a cent and I said no, even though I did. Flexibility works both ways: you help me, and I’ll help you. After some huffing and puffing she gave me a €10 note in change. I left hoping she’ll be shot in the morning for that missing pfennig.

I wasn’t bothered about not being able to buy the booze, I had plenty of it already and my friends had gotten through ze German till with ein minute to spare. But it did highlight the difference between France and Germany. In France they’d have found a way to get around this restriction, one way or another. Either they’d have fiddled with the till or they’d have got a supervisor to override the block, or something. But they’d not tell a customer they couldn’t buy drink because the till said it was too late.

There were other reminders that I was in Germany, too. Last time I went was in 2012 and I thought the food was good but then I was living in Nigeria. Alas, this time around I found the food bloody awful: grey sausage on a bed of sauerkraut sitting in watery gravy. That’s what three years in France does to a person, it renders them unable to eat practically anywhere else. In one place I ordered a dish which came with two very small pork chops, which I found hiding under some cabbage. Halfway through the meal the waitress came over with a small bowl, like the kind you put sugar in, containing another two pork pieces. She said “These are for your meal,” and walked off. I dumped them on my plate and carried on eating. I was sat with a Frenchman at the time and I asked him if he could imagine this happening in a French restaurant, a chef forgetting to add half the meat and sending it out in a bowl later. He couldn’t, and neither could I.

The beer was good though, and cheap. Some things never change.

23 thoughts on “A Trip to Baden-Baden”