Back in 1989, when I was about 11 or 12, a chip pan caused a 2-storey house to catch fire in Pembroke Dock, near where I lived. The house belonged to a family of six: the parents, a daughter who was my age, two boys who were below ten, and a toddler. The parents and the toddler were on the ground floor and they got themselves to safety, but the two boys were trapped in an upstairs bedroom. They pawed at the window as their room filled with smoke in full view of horrified onlookers below. Their father, Brian, tried to get into the house with a wet blanket over his head but was beaten back by the heat and smoke, and injured his ankle in the attempt. The two boys died, mercifully from smoke inhalation. The daughter was out of the house visiting a friend, so was safe.

The deaths of Luke and Lee Roberts made the front page news of the local paper, and shocked everyone in the area, particularly as many of my schoolmates lived on the same estate and one or two had known the boys and witnessed the tragedy. The daughter, Helen, was in my year at school. I got to know Brian a short time later: he was a farmhand and over the next four or five years we’d work together on a nearby farm. During harvest time he’d bring his wife along, and sometimes his daughter and youngest child. I never heard him mention the incident and if I’d not known about it I wouldn’t have guessed it occurred by his demeanour, but I’m sure it haunted him and does to this day.

House fires were fairly common back then. Somewhere outside Kilgetty there was the shell of a burnt-out house that stood for some years before it was restored, and every few months the papers would carry a story of a terrible house fire. It occurred to me quite recently that you don’t hear these stories in the UK very often any more, and such tragedies almost seem confined to the developing world. I would guess there are several reasons for this. Chip pans – a saucepan full of boiling oil on a stove – have been replaced by much safer electric ones; people don’t smoke as much indoors any more, meaning no more cigarette butts dropped in bed or down the side of sofas; almost every material in a home (e.g. curtains, sofas, upholstery) is flame-resistant; and building standards have improved massively especially where electrical wiring and fireproofing are concerned. I heard that most house fires these days are caused by candles, which suggests the problem is largely solved.

This is why I found this so surprising:

Thirty people are in hospital and there are fears that more may be unaccounted for after a huge fire raged through the night at a west London tower block.

Firefighters are still tackling the blaze at Grenfell Tower in north Kensington, where hundreds of people are thought to live.

The BBC’s Andy Moore said the whole 24-storey block had been alight and there were fears the building might collapse.

This sounds absolutely horrific, and it looks as though there will be many casualties. My first thoughts were to the age of the building: this will give some idea as to how well it was designed to resist fire and prevent one spreading. It was built in 1974, long before modern fire-safety standards were incorporated into the building code. I would doubt, or at least hope, that such a fire could not occur in a modern building.

Some retrofitting work ought to have been done to bring elements of the building up to modern safety standards, but gaps will remain. Plus, it also assumes that the remedial work was properly carried out. There are other issues too, unrelated to the design: I have been in tower blocks in the Middle East where the fire escapes were used to store furniture, and junk routinely blocks exits. Keeping the fire escapes clear and ensuring the equipment and other infrastructure (doors, vents, etc.) are in working order is as important as a good design.

The Grenfell Tower is managed by a company called KCTMO, and if this blog post from November 2016 is anything to go on, they may have some explaining to do:

It is a truly terrifying thought but the Grenfell Action Group firmly believe that only a catastrophic event will expose the ineptitude and incompetence of our landlord, the  KCTMO, and bring an end to the dangerous living conditions and neglect of health and safety legislation that they inflict upon their tenants and leaseholders. We believe that the KCTMO are an evil, unprincipled, mini-mafia who have no business to be charged with the responsibility of  looking after the every day management of large scale social housing estates and that their sordid collusion with the RBKC Council is a recipe for a future major disaster.

It is our conviction that a serious fire in a tower block or similar high density residential property is the most likely reason that those who wield power at the KCTMO will be found out and brought to justice! The Grenfell Action Group believe that the KCTMO narrowly averted a major fire disaster at Grenfell Tower in 2013 when residents experienced a period of terrifying power surges that were subsequently found to have been caused by faulty wiring. We believe that our attempts to highlight the seriousness of this event were covered up by the KCTMO with the help of the RBKC Scrutiny Committee who refused to investigate the legitimate concerns of tenants and leaseholders.

We have blogged many times on the subject of fire safety at Grenfell Tower and we believe that these investigations will become part of damning evidence of the poor safety record of the KCTMO should a fire affect any other of their properties and cause the loss of life that we are predicting.

The Executive Team of KCTMO is shown on their corporate website: 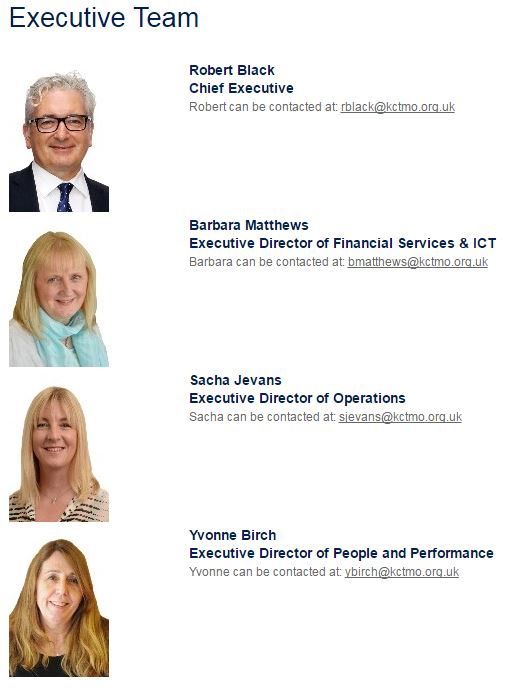 I wonder how many of them thought they’d take a cushy job in an air-conditioned office, unaware of what responsibility rested on their shoulders? The board of KCTMO, to whom they presumably report, looks like this: 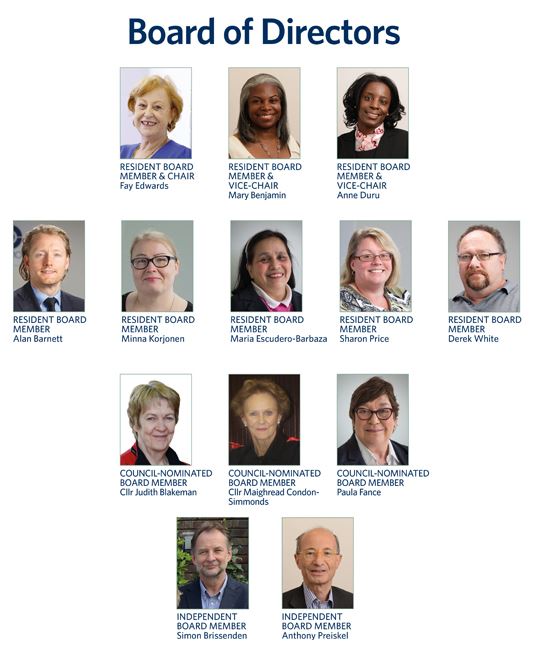 How many of the above mugshots do you think are of people who are goal-driven, versus those for whom the process is everything and the outcome immaterial? How many do you think have the welfare of their properties’ residents at the forefront of their minds, and how many are in it for themselves? You can’t tell? Nor can I, but one of their towers is on fire with people inside it.

I suspect the subsequent investigation into this catastrophe will find massive deficiencies in the fire protection in the Grenfell Tower that have been known about for years but nothing was done. An inspection of similar buildings in London will be carried out and will reveal that a lot of them are death traps in similar condition or worse. Like the Kings Cross fire in 1987, this incident will bring in sweeping changes to how residential apartment blocks are managed and maintained from a fire-safety point of view. Incidents like this simply should not happen in the UK in 2017: somebody has fucked up, massively.

I suspect the root cause of this disaster is wholly inadequate people holding management positions who are unable or unwilling to carry out their responsibilities towards those depending on them. The report will use words like “managerial failings” but what this boils down to is the practice of employing useless people. Given how widespread this is and how unwilling organisations are to address it, we can expect more such incidents in future.