I’ve been critical of the cosy arrangement between Bayern Munich and the Bundesliga before:

It has long been my opinion that the Bundesliga is run for the benefit of Bayern Munich and the national football team, whereby anyone who shows a smidgen of talent in the other clubs is snapped up by Bayern Munich who immediately trebles the player’s wages.  Other clubs have almost no chance of competing unless they could stumble upon a few youngsters and assemble a side that could be held together long enough to win before the bigger clubs came and swiped their best players, as Klopp managed to do.  As a method of winning the World Cup it proved successful as Bayern Munich players formed the core of the German team that won in Brazil in 2014, but I am doubtful that it benefit the long term health of German football.  Bayern Munich won the league by 10 points last year, 28 points ahead of the 3rd placed team; they won by much the same margins the year before that; in the 2013-2014 season – Guardiola’s first in charge – they won with 90 points, 19 ahead of their nearest rival and 26 ahead of third place; much the same was true for the season before that.

Last week Bayern Munich crashed out of the Champions League quarter finals with a 6-3 aggregate defeat to Real Madrid. This is the shape of the Bundesliga table right now: 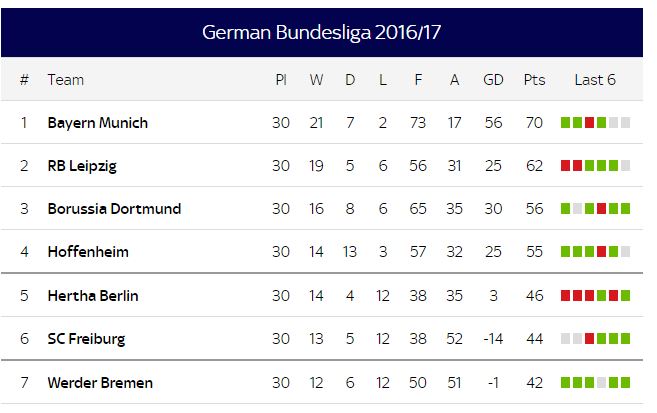 As usual, Bayern are cruising to a 5th successive Bundesliga title having lost only 2 games in the league (and they’re still in the cup). Probably the first difficult match they had all season was when they met Real Madrid. Little wonder that, despite the vast array of talent on their benches, they lost. The players probably forgot what it’s like to have to mark the likes of Cristiano Ronaldo, who scored a hat-trick in the second game, including one with his head.

The other German teams aren’t doing much better: Borussia Dortmund also lost their tie 6-3 on aggregate against Monaco in the CL, and Shalke went out of the Europa League at the hands of Ajax the next day.

Despite the entire German football system favouring Bayern Munich at the expense of all other teams, they’ve not won the Champions League since 2013, and before that it was in 2000. This is not a great success rate. True, they have a good history of getting to the semi-finals, but this is hardly worth sacrificing an entire league for.

The problem was summed up neatly by two of the English commentators during the Real Madrid match. One speculated what would happen when veterans like Philipp Lahm and Thomas Müller retire. The other quipped that they’d just buy Borussia Dortmund’s best players in those positions.

The quality of football in the English Premier League might not be as good as that of Spain’s La Liga or even Italy’s Serie A, and English clubs have performed woefully in Europe for several years now. But at least the EPL is fiercely competitive and hasn’t become the farce that the Bundesliga now is. I’m wondering how long German football can continue like this before people start losing interest.

9 thoughts on “The Bundesliga Fails Again”