Whenever the US gets involved in a conflict somewhere in the world there is always, always somebody on the American Right who will come out with some bizarre conspiracy theory involving a pipeline.  It’s always a pipeline.

Before 9/11 when the Taliban were running Afghanistan and blowing up statues of Buddha, the lunatics on the extremes of both Left and Right were saying that the US was supporting the Taliban because they wanted to build a pipeline through the country between Pakistan and, erm, somewhere.  They cited a report showing that Unocal, an American oil company now owned by Chevron, did once consider building a pipeline through Afghanistan but the project got nowhere near even the engineering phase.  They accepted without question, as these people often do, that US foreign policy is determined in part by medium-sized oil companies best known for gasoline retail.  Or at least it is when the Jews go for their lunch break.

Immediately following the American assault on the Taliban which removed them from power, the conspiracy theorists simply switched to claiming the reason for the attack was in order to build – you guessed it – this Unocal pipeline.  Oliver Kamm wrote a decent post covering this switch and the absurdity of it on his blog at the time, and it is worth reading.

I was reminded of this today when I was directed via another blog to this Twitter post: 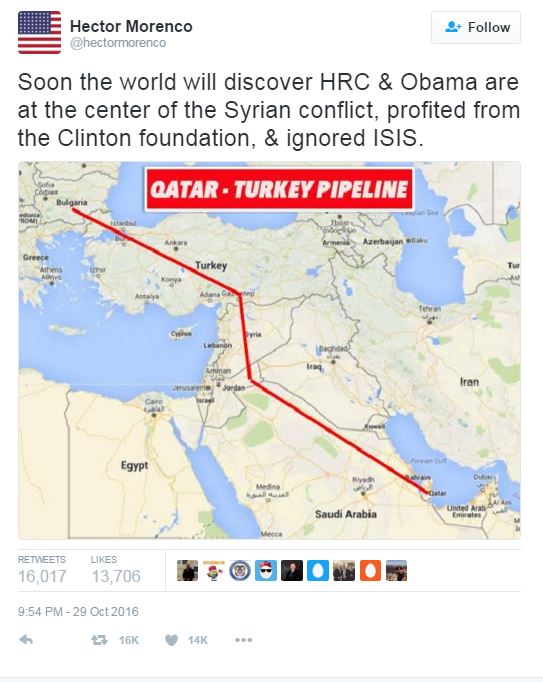 It’s always about pipelines with these people.  They have this daft idea that pipelines are so valuable it is worth going to war just to build one.  How the US government is supposed to benefit from a pipeline, presumably carrying gas, from Qatar to Bulgaria(!) I don’t know.  Obviously whoever dreamed up this particular theory hasn’t heard much about LNG and the growing spot market, nor US shale gas.

You don’t need to be a fan of Obama or Clinton to find this level of political analysis from the American Right to be as stupid as anything the American Left can come up with.

26 thoughts on “Another Nutjob in the Pipeline”