Tom Paine makes the following comment on his own blog:

[T]he pessimism of the Left — their bizarre, inhuman – nay anti-human, notion that, left unregulated, we would fall savagely upon each other like wild beasts…

We humans are far better than the Left believes.

The Left regarding humans as savage mutual predators is a similarly good predictor of how they will use the absolute state power they constantly advocate — ostensibly to protect us from ourselves.

I came across this yesterday while preparing to write a follow-up to this post on discrimination, and it serves as a good introduction to what I am about to say.

I am of the belief that private business owners ought to have the right to discriminate against people on any grounds they please.  The principle behind this belief is one whereby each individual has the right to choose with whom they associate, communicate, and do business.  Once laws are applied stating that the individual is compelled to do business with somebody they would otherwise prefer not to, then that right has been breached.  I believe the right to free association ought to trump somebody else’s right to access a service or product being provided by an ostensibly free individual.

Some people find that to be quite an extreme position, and perhaps it is.  But I would rather start from that extreme position and deal with any unpleasant consequences as and when they come up rather than take the position which prevails today whereby laws are passed based on hypothetical situations which could possibly arise.

For example, if there is a situation already existing whereby blacks, gays, or gingers cannot access goods and services in a town or village because every business has refused to deal with them and the reasons are quite obviously because of their minority status, then perhaps there is a case for government intervention.  Perhaps.  But the onus would be on the government and those wishing them to intervene to demonstrate that this is a serious and genuine problem which is causing unacceptable hardship to a substantial number of people.  I don’t know whether this situation has ever arisen before: perhaps it did in the American South before the Civil Rights movement, but we ought to remind ourselves that segregation between the races was enshrined in law.  Chalk up another victory to the political process, illiberal laws, and the tyranny of the majority.

However, the approach today is to assume that, in the absence of anti-discrimination laws, this situation would arise in every town and village across the land and thousands of blacks, gays, and gingers would find themselves unable to do their grocery shopping or stay in hotels.  This assumption rests on the belief that we are all closet racists, homophobes, and anti-gingers and hence the force of law is required to keep us all in check.

Only the people who support these laws, which is most people, never consider that their behaviour needs such restrictions applied.  Oh no, people who support anti-discrimination laws are, of course, as pure as the driven snow and treat everybody with the utmost fairness and respect.  And so do all their friends.  It is those mysterious “other” folk who are the racist knuckle-draggers who would bar their doors to anyone that didn’t look like the Milkybar Kid.

“Oh no,” they reply.  “Of course I don’t.  But you must be very naive to assume nobody thinks like this.”

And there we have it.  Laws must be brought in to curtail potential behaviour of unidentified individuals who might harbour the wrong thoughts.  It’s a pretty dim view of humanity, I must say.

Supporters of anti-discrimination laws often refer to the era in Britain where “No Blacks, No Dogs, No Irish” signs appeared in business premises up and down the nation, and they will usually link to a photo to prove it, such as this one: 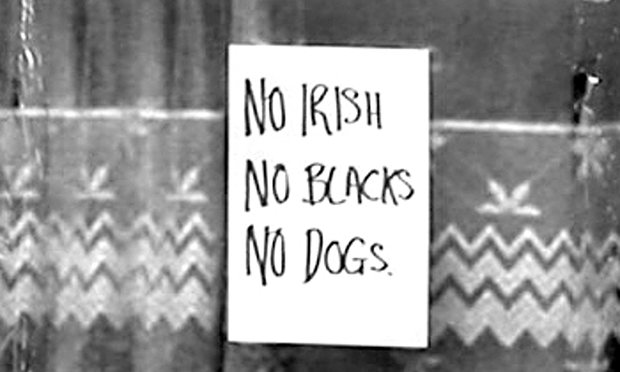 In fact, that is the wrong term to use.  It is always this one.  Whenever the ubiquity of such signs comes up in an online discussion, the photo above is seemingly the only one which exists of what was supposedly a very common sight.  One would have thought there would be numerous examples of such prejudice, complete with the photographers’ names, if they commonplace.  A letter in The Guardian on the subject says this:

A much-reproduced photograph is held by the Irish Studies Centre of London Metropolitan University. It depicts a front window with handwritten signs saying “Bed & breakfast” and “No Irish, no blacks, no dogs”. The photograph emerged only in the late 1980s, and the university has conceded to me that it is of “somewhat uncertain” provenance. They have been unable to discover who took the picture, where or when. An old news clipping which I have presented to the university points to the image having been mocked up for an exhibition called “An Irish Experience” mounted at the now-defunct Roger Casement Irish Centre in Islington, London.

This dubious picture has long been cited by politicians, academics, even the Equality and Human Rights Commission, all of whom no doubt believe it is genuine. Many even claim to have seen such signs in the past, though what they may actually remember is the London Met picture endlessly recirculated, nowadays on the internet.

What depresses most is that some people wish that these signs were everywhere and that Britain really was this awful, racist society so they can justify passing illiberal laws now.  Similarly, they actually want situations of intolerance to arise so they can pass ever-more stringent laws forbidding individuals from doing as they please.

For my part, I take a more rosy view of my fellow citizens.  I think if all anti-discrimination laws in Britain were thrown in the bin tomorrow you would not find a single instance of any minority unable to secure access to goods or services anywhere.  Sure, you might find the odd B&B or shop who refused to serve them, but I think market forces would solve this problem in very short order in two ways: firstly a rival would post a big sign saying “Minorities Welcome Here” in their front window, and secondly ordinary people would decline to do their shopping in an establishment that was so intolerant.  For all the furor over the gay wedding cake it was never the case that the couple concerned could not find a baker anywhere who would do what they were asking.  They merely selected one who they thought likely to object and then punished them for having the wrong opinions.  This is not liberty, it is control.

And this is what it’s all about when it comes down to it: control.  Anti-discrimination laws have little to do with protecting minorities and everything to do with outlawing opinions that a vocal minority don’t wish people to hold.  The whole lot should be torn up and thrown in the bin and those supporting them told to jump in a lake.

14 thoughts on “On Anti-Discrimination Laws”