Michael Jennings isn’t going to like me pointing this out, but Australian sport appears to be going through a rough patch at the moment.

In 2012 Australia was so confident of whipping Britain in the London Olympics that their sports minister made a wager with ours, which she went on to lose.  But the decline had started earlier, as the following tables show:

As Britain’s success grew, Australia disappeared into the ranks of the also-rans.  My guess would be that Australia pioneered a lot of professional sporting techniques – particularly in swimming where they used to do extremely well – and had world-class coaches who were ahead of their time, plus generous funding for their Olympic sports programmes.  Now that other countries have matched or exceeded the funding and adopted professional training regimes, as well as hire a lot of Australian swimming coaches, the Australians don’t have the edge and their small population isn’t producing enough talent to dominate like they used to.

Australia is also going through a low point in Rugby Union, which I don’t think is a mere blip.  Following a strong showing in the 2015 RWC (where they avoided South Africa and rarely worried the Kiwis in the final), their Super XV franchises did spectacularly badly the following season: 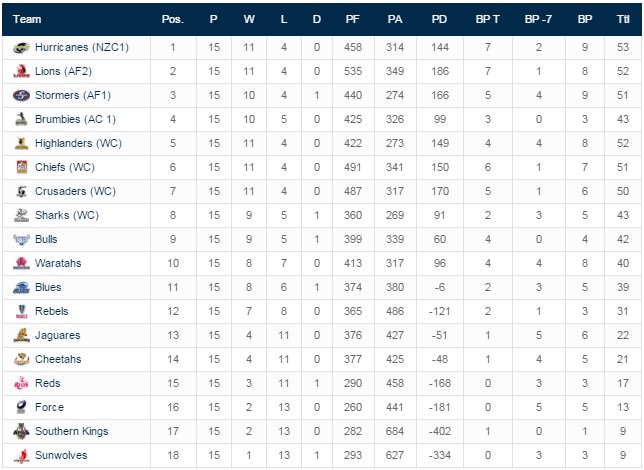 Were it not for the wildcard system that ensures the playoffs are not dominated by the Kiwis, the Brumbies – Australia’s best side – would have finished joint 7th on points and miles adrift of 5 of the 6 New Zealand sides.  The Brumbies got dumped out of the knockout stages in the first round, and that was the Australian effort over for 2016.

But what made it far worse was that halfway through the season England toured Australia for a 3-test series and went back home having whitewashed their hosts.  For Australia to be beaten 3-0 by a Northern Hemisphere touring side was unprecedented, and it was especially perplexing because Australia had comprehensively beaten an England team made up of much the same players on their home ground in the Rugby World Cup the previous year.  Only in the intervening period the English Rugby Union had snaffled the wily Australian coach Eddie Jones who had made few personnel changes but utterly altered the mindset and gameplay to a degree Australia did not appreciate until it was too late.  And it that weren’t bad enough, the next time the Australian national team pulled on their jerseys they received a 42-8 thrashing on their home turf at the hands of an All Black side which seems to only get better with each passing year.

Traditionally Australia can turn to cricket to feel good about themselves sports-wise, but unfortunately they’ve just been beaten 3-0 in a test series in Sri Lanka: up until this tour, Sri Lanka had managed to beat Australia just once in test matches, back in 1999.  What must worry the Australian selectors and fans is not that this record has been broken, but that the players looked utterly clueless against a Sri Lankan side who had been all but written off with the recent retirement of three of their greatest ever players.  Today the news is that Australia’s captain Steven Smith is going home to “rest” with the ODI series sitting at 1-1 with 3 more to play, which is drawing a lot of criticism from fans who have been brought up on stories of Border, Taylor, and Waugh eating barbed wire for breakfast.  There is much discussion in Australian cricket regarding their apparent practice of using fast and bouncy drop-in pitches at home to guarantee success against visiting sides, which is leaving them hopelessly unprepared for swinging conditions in England or the spin of the sub-continent.  By contrast, England’s humiliating exit from the 2015 ICC World Cup resulted in the wholesale firing of the coaching staff and the appointment of the experienced and canny Trevor Bayliss – an Australian – who immediately turned the team’s fortunes around by winning the ODI series against the more fancied New Zealand.

I daresay Australian sport will pull itself out of this hole and start winning things again, but they might find they are going to have to work a lot harder than previously to do so: the rest of the world, particularly England/Great Britain, has caught up by adopting their methods and hiring their coaches.

20 thoughts on “The Decline of Australian Sport”