I’d be lying if I said I was shocked or shaken by the attacks on Charlie Hebdo’s offices in Paris last week.  It may be different for the French, but I’ve gotten strangely used to this.  Indeed, the only thing which is surprising is how surprised everyone is.

9/11 was a shock, one I remember feeling shaken by even several days later, and waking up the morning after thinking it very surreal.  2002 saw the appalling bombing of the bar in Bali (with a less deadly repeat in 2005).  In 2004 came the train bombing in Madrid, which few outside of Spain seemed to care much about once the intial bang had faded from earshot.  Then we had 7/7 in the UK in 2005, which to me wasn’t much different from the IRA bombs only this time the perpetrators spoke English better and probably didn’t like Guinness.  In 2008 the Mumbai attacks took place, featuring Islamic gunmen massacring people in a hotel.  2013 saw the bombing of the Boston Marathon, the same year Lee Rigby had his head hacked off in a London street by two men shouting Islamic slogans.  Last month a headcase waving an ISIS flag took over a coffee shop in Sydney, killing two people in the process in an act which a lot of Australians seemed to avoid condeming.  In fact, these atrocities have become so common I’m sure I’ve forgotten several of them, not to mention all the smaller attacks and foiled plots such as Glasgow Airport, the underwear bomber, etc.

A murderous attack on the office of a satirical journal in France by Islamic lunatics is unique only in the specific target, the country, and the date on which it took place.  In all other aspects – including the wholly predictable response from the media and politicians – it is dreary business as usual.

At least that’s how I felt.  I heard the sirens and saw the flashing lights, and saw this on my way to work on Thursday morning: 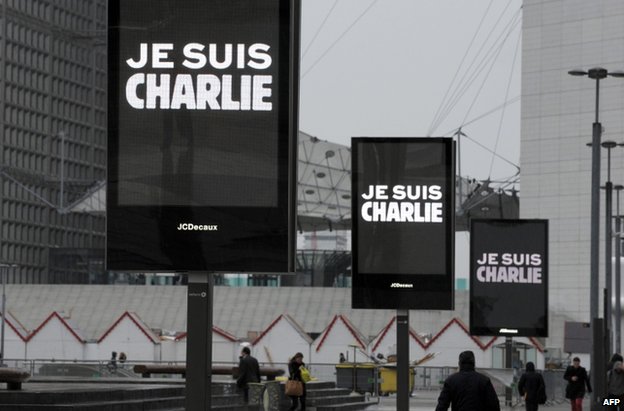 I also attended the two-minute silence my employer organised, believing quite genuinely that the murdered deserved my thoughts.  The attacks are an outrage – a disgusting event – but shocking, at least to me, they are not.

And nor should they have been, at least to the French.  The list of attacks I have posted above notwithstanding, the French have been sitting on a timebomb of their own making for years.  In browsing the blog discussions following the attacks, I came across this article written by the splendid Theodore Dalrymple on the ghettos established outside of Paris to house immigrants from north and sub-Saharan Africa.  It is impossible to select any paragraphs to quote, so I encourage you to read it all.  Sadly, the article was not written in time to alert the French authorities as to the serious problem they have in the heart of their country, published as it was in 2002!!

There are many theories in place which seek to explain why such attacks happen, but it is becoming increasingly difficult to pretend that the politics that has prevailed in western Europe over the past two or three decades has greatly enabled the ability of Islamic nutcases to act, even if we charitably assume these same politics have not facilitated their creation in the first place.  Mass immigration followed by a combination of politically correct permissiveness, a soul-destroying welfare system, and no prospects of employment might not be responsible for people wanting to kill us for our beliefs, but they are sure as hell to blame for these people living in our cities with the freedom to arm themselves to the teeth and murder their fellow citizens again and again.  Each time the affected nation reacts with faux shock, before going back to reinforce the exact same policies which have led us blind into this situation.

I don’t expect anything will change as a result of this latest attack.  And if there is any change, it will be further curtailment of our freedoms and liberty enacted in a manner which will make not the slightest difference to the next atrocity.  Today there is an enormous march planned in Paris under the banner of National Unity.  I won’t be attending, mainly because I have something else to do but also because of this:

Despite the French president calling for “unity” in the light of the Charlie Hebdo massacre, an almighty row broke out on Thursday after the National Front were not invited to Sunday’s Republican rally.

I hold no truck whatsoever for Marie Le Pen’s National Front party or their policies, but the exclusion of a reasonably popular party from a National Unity march on the grounds their politics are not welcome demonstrates that this march is more about maintaining the status quo and saving the faces and careers of the French establishment.  Would I join a march to recognise the attacks on Charlie Hebdo is one attack too many and things must change?  Yes.  Would I join a march in support of the establishment that has presided over this disaster in the first place, and shamelessly intends to continue with the same policies?  No.  So I’m not going.

The attacks revealed to many a yawning chasm between two belief systems, filled with mistrust, a failure to find a common language, and the lack of understanding of one another’s culture.  Obviously I’m talking about the French and the British.  Many of the British commentators referred to Charlie Hebdo’s output as infantile, childish, and unsophisticated.  Which indeed it was.  But France has long had a much different relationship with cartoons and comics than Britain, one that is probably unique to France.  Adult (in the sense that adults read them, as opposed to the content being sexual) comics are very popular here, similar to Japan.  Satire via comic stips and cartoons is as much a part of the French culture as Camembert, cafés, and strikes on the SNCF.  Our office sees the circulation of a satirical magazine (I have no idea who publishes it) which pokes fun at the company, CEO, and other board members.  One of the French unions produces a regular newsletter consisting mainly of cartoons and silly slogans which it hands out in the canteen.  A recent edition featured one of the newly promoted directors who looks a bit like Ken photoshopped to be lying in bed with Barbie discussing whether he should speak French or English.  I don’t think the concept exports well, with probably only the Asterix books being a success in this regard (mainly thanks to Anthea Bell’s brilliant translations), but it is very much a distinct aspect of French culture.

From what I can tell, it is more the fact that crude cartoons were attacked more than the message being conveyed.  Had they bombed Le Monde, chances are the reaction wouldn’t have been so defensive: every country has newspapers, but only France has deliberately offensive satirical cartoons.  Nothing highlights the cultural gap between France and Britain more than the uncomfortable suspicion that Charlie Hebdo would not have lasted more than a year in the UK before being hounded out of business by the state and its backers in one form or another, as this article makes clear.  Rather than go on a hypocritical jolly to Paris today, David Cameron might want to reflect quietly on that for a moment and ask himself where he thinks his country is headed.

For my part, I’d never heard of Charlie Hebdo before the attack, but I will make sure I buy a copy when it comes out on Wednesday.  Having browsed the cartoons that have been displayed online (no thanks to our brave and fearless MSM), I agree that they are infantile – but at the same time, very very French.  Although this one I thought made a very pertinent point regarding ISIS: 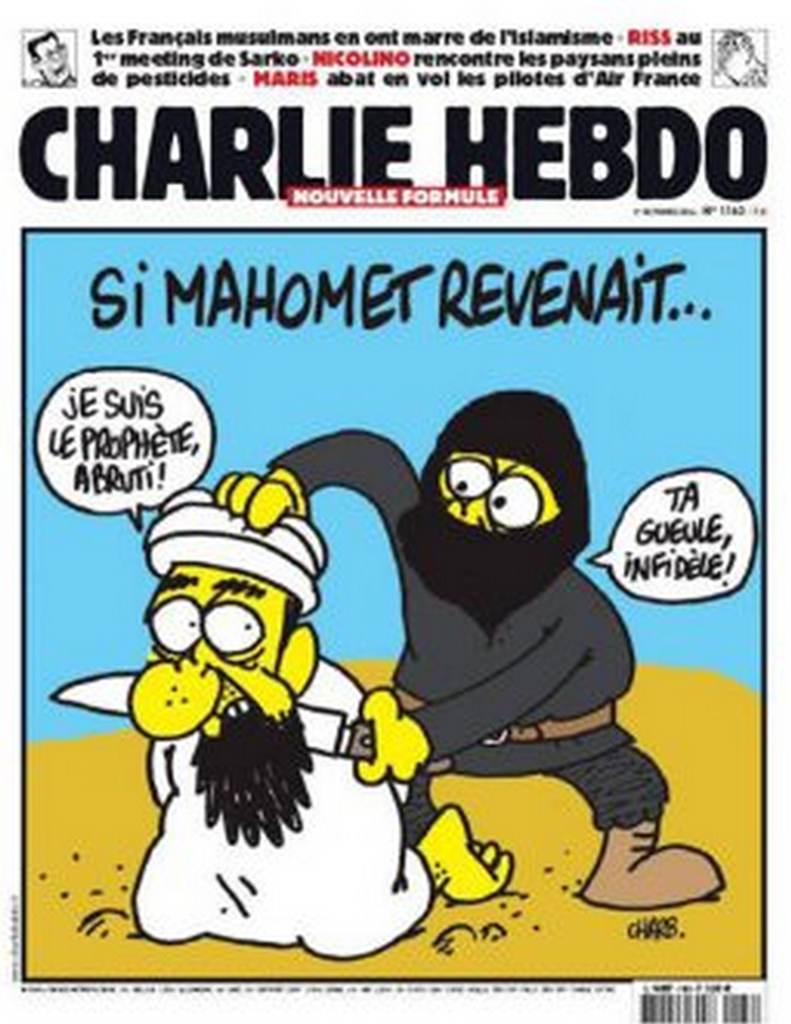 We need more of this, not less.

13 thoughts on “Plus ça change, plus c’est la même chose”