The recent helicopter crash in the North Sea has made a lot of us in the oil and gas business nervous.  Since February 2009 there have been five helicopter accidents in the North Sea,  with all five featuring Eurocopter Super Pumas, albeit of two different models: the AS332 and the EC225.  The AS332 is the older model, replaced by the EC225.

The helicopter which crashed last week was an AS332, but ironically just a little over two weeks before the EC225 had re-entered service having been withdrawn following three ditchings in which there were thankfully no casualties.

Flying offshore in helicopters is a horrible business.  It sounds exciting, but it’s really not.  Firstly, you have to sit through important but mind-numbingly dull safety briefings before every flight, regardless of how often you fly.  Then you have to don a bulky, hot, survival suit and cram yourself into a tiny seat beside somebody else and prepare for an arse-numbing, bumpy ride over a deeply uninteresting piece of sea for one, two, or three hours.  It is very noisy inside the helicopter – you have to wear ear defenders – and you can’t really do anything except read a book.  Conversation is impossible.  The craft jolts about a lot, and you’re ever-conscious of the flimsy disc whirring above you and the extreme complexity of the equipment driving it.

I’ve not flown over the North Sea, but I flew offshore Nigeria a few times.  At least there you don’t need to wear a survival suit, the water being warm enough to survive in.  If the sharks don’t eat you.  That makes it more comfortable, but it’s still pretty horrible, mainly because of the heat.  Helicopter cabins aren’t air-conditioned.

I also flew offshore Sakhalin a couple of times, in a Russian Mi-8, which is a beast of an aircraft.  With the aerodynamics of a flying brick, it is noisy and uncomfortable even by helicopter standards.  But it does have a reputation as being as strong and reliable as a brick as well, and the Russian pilots employed on Sakhalin were second to none.  We had to wear survival suits there, with quilted linings, although with a metre of ice covering the sea over the whole flight path I’m not sure whether we’d have gotten wet before being smashed to smithereens.

I don’t know anyone who likes flying these things, and incidents such as the one last Friday aren’t helping.  I rarely agree with Bob Crow and the RMT, but I can see why he has called for the entire Super Puma fleet to be grounded.  Some of the oilfield workers have started a campaign to get the Super Pumas out of the skies for good, with the Sikorsky S-92 being touted as an alternative aircraft.  However, one of these crashed in 2009 off Newfoundland due to a gearbox failure.

Truth is, as any army helicopter pilot will tell you, helicopters are insanely complicated things and as such a lot less safe than a fixed wing aircraft.  They do train us to escape from a helicopter that has ditched in the sea and turned turtle, and I wrote about when I did this course shortly after I arrived in Nigeria.  They rig up a simulated helicopter fuselage complete with seats and pop-out windows, you all climb in and take your seats, and then they dunk you in the water.  They do this 6 times, and for the last 3 times they spin the whole apparatus upside down, and you’re expected to unbuckle yourself and get out.  It’s a lot easier than it sounds, once you remember that the window on your right-hand side is still on your right-hand side even when you’ve been tipped upside down.  This is not as easy as it sounds.

Digging through some old files the other day I came across this picture of me, sitting on the left by the window that’s a lot smaller than everyone else’s, about to be dunked in and flipped over. 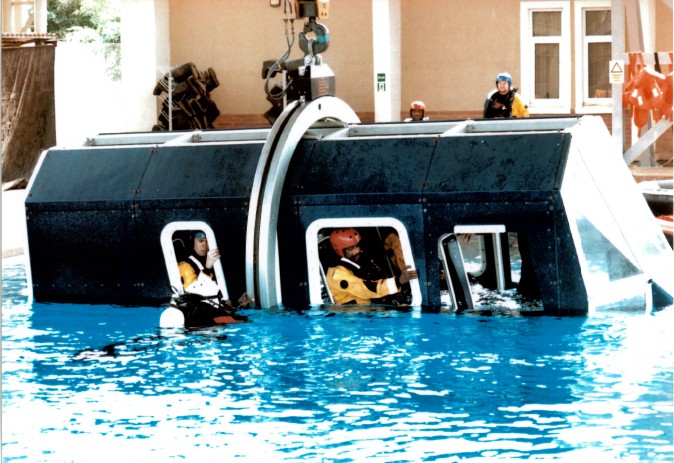 At least the water was warm in Nigeria.