Before yesterday’s rugby world cup final I was supporting England. I thought it would be good for a northern hemisphere team to win and I do live in England after all. However, my support was reluctant because, as is common, my social media feeds were full of English fans disparaging the Welsh with pictures such as this: 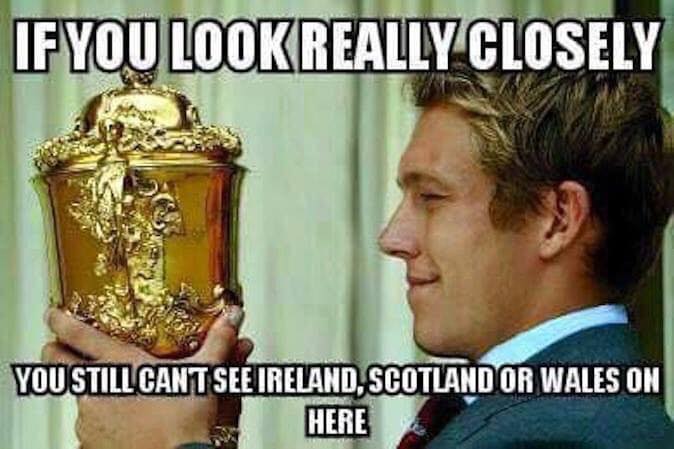 Here’s the thing. Wales punch miles above their weight when it comes to rugby considering their size, population, and mediocre clubs (none seriously competes in the Heineken Cup). Finishing 4th for the second time in 8 years is a pretty decent achievement. Realistically, Wales are never going to win a world cup. It would take them having a freakishly good team and everyone else to be unusually crap, and it would be an upset not quite on the scale of Greece winning the 2004 European Championship but something close to it. The best Wales can do is win the Grand Slam fairly frequently, get to the semis of a world cup, and claim a southern hemisphere scalp every now and then.

England, by contrast, are massive underachievers when it comes to rugby. They’re a large nation with well-funded infrastructure and teams which regularly compete and win the Heineken Cup. By rights they should be winning the Six Nations most years, Grand Slams several times a decade, and thinking they’ve had a poor tournament if they finish second. They should be finalists or semi-finalists in every world cup, and should have won more than one by now. For the English to mock the Welsh for having not having won a rugby world cup is like France mocking Belgium’s inability to win a world cup at football. I’ve often thought that England’s solitary RWC win 16 years ago has had the same effect as their FIFA one in 1966: they dine out on it for decades, kid themselves they’re genuine contenders every year, but somehow never add to the trophy cabinet.

And so it proved yesterday, when England got taken apart by a South African side who were better in every department on the day. The two most comprehensive beatings of the tournament between top tier sides was England’s defeat of New Zealand and South Africa’s thrashing England. The problem England have had for a long time is they’re invincible when their game plan works as it did against New Zealand, but if it doesn’t they have to wait for half time so the coach can tell them what to do instead. They’re a team seriously lacking in leadership. They’ve got strength, skill, and guts in abundance but nobody with the rugby brain of a Kieran Read, Beauden Barrett, or Faf de Klerk. A couple of seasons back in the Six Nations the Italians decided to throw a spanner in the works by refusing to form rucks, meaning they could defend from positions which would otherwise be offside. The England team, seemingly lacking anyone who knew the rules, had no idea what was even happening let alone how to deal with it.

So yesterday when they found their scrum going backwards at 30mph in the first few minutes they lost their heads. Ben Youngs threw a ball over the head of the winger and out of play, George Ford hoofed it into touch on the full, passes went astray, and balls were knocked on. Manu Tuilagi, the hero against New Zealand, didn’t trouble the commentators until a quarter of the match had been played. A lot of people are blaming the referee, but sloppy play is hardly his fault. England were unlucky to lose Kyle Sinckler so early on, but I doubt that made much difference. South Africa simply wanted it more, and played as though they were in a final. This maul appearing from nowhere in open play is one of the best moves I’ve seen in a rugby match:

This is what playing to your strengths looks like. South Africa’s performance in a snapshot. Clever and brutal. pic.twitter.com/ht1x3QhhNm

As the match wore on I found my support for England waning on the grounds that I didn’t think they deserved it. As someone on Twitter said, New Zealand played their final against Ireland, and England played theirs against New Zealand. South Africa played theirs in the actual final, and deservedly won. England, having won one final out of four, are starting to look like chokers. My advice is they worry more about their consistent underachieving rather than spending time mocking smaller nations. After all, we were ravaged by injuries yet came within one penalty kick of stopping South Africa reaching the final, and we put a try past them. Maybe they should swap Eddie Jones for Warren Gatland?

29 thoughts on “Coming forth to carry me home (empty handed)”